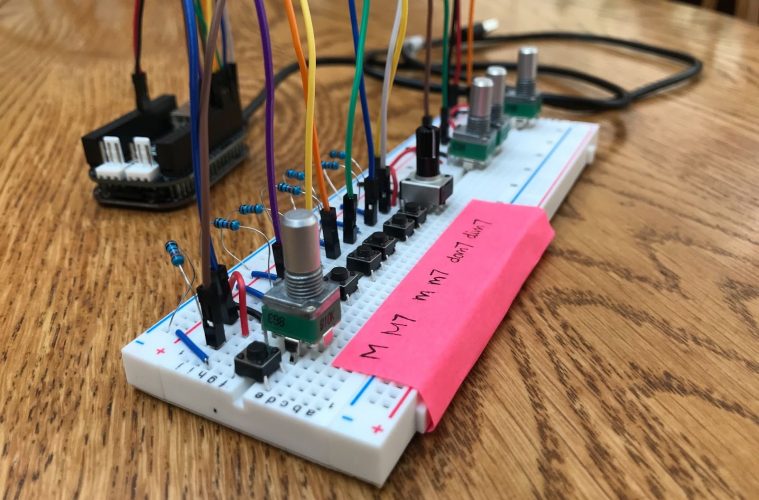 The science of music

This spring, a small class of musically inclined engineering students learned how to bridge the gap between their passions for STEM and the creative arts when they signed up for the electrical, computer and systems engineering (ECSE) course Embedded Computing for Music.

Marie Pugliese, a third-year student majoring in electrical engineering with a minor in music, used her background as a jazz pianist to develop a chord builder for keyboard. Pugliese used graphical coding to create an audio signal that fed into her digital instrument. She then configured the provided hardware to make controls for pitch, volume, frequency oscillation (which creates a vibrato effect), and chord type.

“This class taught me about what’s going on at the technical level behind a lot of music production and digital instruments,” she said. “I found it eye opening because I wasn’t aware of any of this.”

Colb Uhlemann, a fourth-year electrical engineering student who sings for CWRU a cappella group Case in Point and plays piano, said he jumped at the opportunity to take the course because it was a “perfect combination of my two interests: music and engineering.”

Uhlemann created a synthesizer to compose chords for his first project. His second project, a vocal harmonizer, simulated a “real-time background choir” using his own voice at different pitches.

Richard Graham, adjunct professor in the Case School of Engineering, part-time lecturer in the Department of Music and program coordinator for Sears think[box], brought his educational and professional experience to this first-time Special Topics course.

Like his students, Graham has a passion for music and science. He holds a master’s degree in music performance and a PhD in music technology. In addition to his work at CWRU, Graham owns an audio technology company that creates instruments for music, film and gaming. He also plays electric guitar and produces music.

Throughout the course, students heard from audio and technology industry experts during live Zoom lectures, including the inventor of Pure Data, members of the Bela team, and a NASA research scientist who is also a musician, audio engineer and music producer.

“Getting to know Richard and hearing the many guest speakers made me realize how broad the field is. It now seems like a place where I would really like to be,” said Uhlemann, who is doing his summer internship at Shure, an audio products company in Niles, Illinois.

Vaughn, who sings and plays several instruments, said his background in digital music began with arranging pre-recorded loops on his dad’s laptop, but the digital musical instrument class “showed me a facet of my major that I was previously unfamiliar with.”

That’s exactly the outcome Graham had hoped for when he first pitched the idea for this course.

“There’s a real need for engineers that have an understanding and interest in music. All of the students in this class will excel if they decide to pursue this path,” Graham said.