NBA star LeBron James made career decisions in 2010 and 2014 that stunned the sports world and eventually resulted in two team championships with the Miami Heat and one with the Cleveland Cavaliers. His methods of communicating also provided a valuable case study used in business communication and leadership courses at Case Western Reserve University’s Weatherhead School of Management.

Their report is posted on SAGE Journals OnlineFirst and will be published in Journal of Management Education.

Manisaligil, the lead author of the paper, was assigned to teach an undergraduate class called Contemporary Business and Communications. He designed the case study for his fall 2014 course and taught it for the first time. Bilimoria, KeyBank Professor and Organizational Behavior Chair, was his teaching mentor then. In fall 2015, Bilimoria brought the case study into her graduate level Executive Leadership class.

“This was around the time when LeBron James announced his return,” Manisaligil said.  “We are a university in Cleveland, so I thought, ‘We can turn this into an in-class activity.’ I had students from all over Case Western Reserve, not just from the business school.” 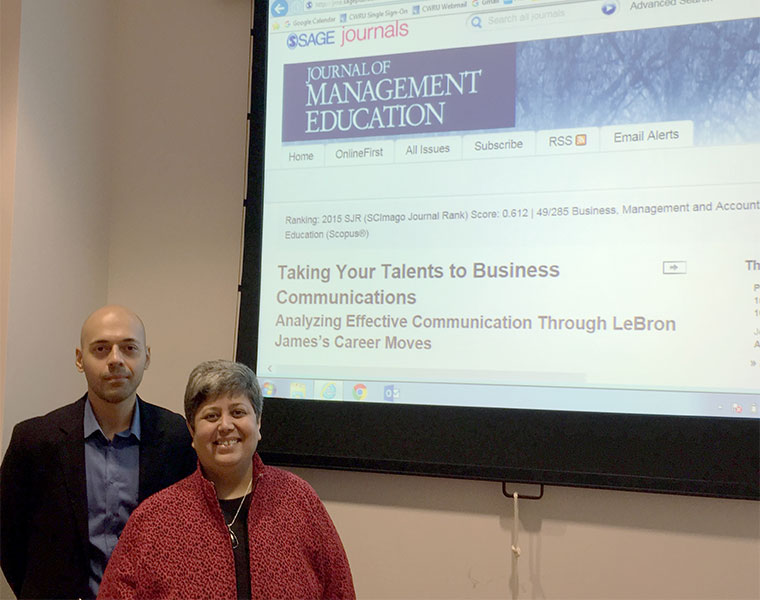 The students were eager to evaluate the methods James chose to communicate his plans and whether he was effective. Managers across an array of businesses often must make tough communication choices.

During a nationally televised interview on ESPN in 2010, James announced his plans “to take my talents” to Miami, leaving the Cavaliers, Cleveland’s NBA franchise near his hometown of Akron. Cavaliers majority owner Dan Gilbert responded with harsh comments in an open letter posted on the team’s website. Gilbert’s communication choice also was part of the classroom discussions.

James and Gilbert eventually put aside their differences.

To announce his return to the Cavaliers in 2014, James posted a letter online through Sports Illustrated, which had covered his pro basketball career and featured him on the cover. In the letter, his carefully chosen words were impactful and showed empathy for Cleveland and Miami basketball fans, Manisaligil said.

“The reason why we chose this as a case study is that it was very timely,” Manisaligil said. “We could watch the video of the televised ESPN interview, or we could read the letter that had just been published. So it was a very contemporary issue of relevance from a business management standpoint. This was an exercise in how managers should, when faced with difficult communication decisions, share a message in a way that is best received.”

Manisaligil and Bilimoria wanted their students to be aware that modern communication methods are varied, and they sought to have the students make their own determination about which forms work best and which might have significant drawbacks.

“From a business point of view, what the original decision interview (2010) left behind was a lot of bad feeling,” Bilimoria said. “Of course, Cavaliers fans would not have been happy with it. Nevertheless, there are people who would say, ‘I understand why he decided that, I just didn’t like how it was done.’”

The return letter in 2014 was a much different approach.

“The process of communicating that decision was more suitable, more appropriate and more measured, the way a business decision made by a manager, executive or a leader should be made,” Bilimoria said. “That is the point we were trying to establish. You must be thoughtful about media elements, and allow that to inform the method of communication.”

Manisaligil and Bilimoria gathered data through questions asked of students about whether the case study was of value to management education. The result, they said, was the students were very engaged and wanted to learn. Manisaligil and Bilimoria said they hope their published paper will encourage others to also use that case study in the classroom.

Their research article concludes that “conducting effective communication is important for all managers and employees, but students often underestimate this. Through accessible content and an interesting case study, this activity helps students advance their skills in medium selection and use to communicate effectively in business settings.”

Dan Karesh and Matthew Bahnij were among the Case Western Reserve students who experienced the case study. Both are finance majors.

“I think it was very good case study to choose,” Karesh said. “It highlighted different communication methods, and you can see LeBron’s evolution in how he communicated his information.”

“This case study had real-life parallels,” Bahnij said. “I was able to attain affirmation of our in-class hypotheses and conclusions by casually talking to local restaurant and bar owners in person or via social media when LeBron James came back to Cleveland.” Sales increased as team supporters suddenly were “looking to see their hometown hero once again.”

This story was originally published Sept. 2, 2016.