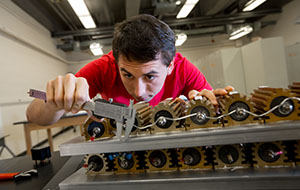 The Burton D. Morgan Suite for Entrepreneurship will be located on the sixth floor of the seven-story, 55,000- square-foot Richey-Mixon Building directly southwest of the Case School of Engineering. It will house satellite offices of the Blackstone LaunchPad student entrepreneurship program, as well as the law school’s Intellectual Property Venture Clinic—both of which earlier received generous support from The Burton D. Morgan Foundation.

“We deeply appreciate The Burton D. Morgan Foundation’s ongoing support for our initiatives in entrepreneurship,” President Barbara R. Snyder said. “This latest commitment to think[ box ] will help ensure that some of our university’s key experts in the field will be on-site with students as they develop their ideas into actual potential products.”

In many instances, the students that Blackstone LaunchPad serves first developed their devices and other products at think[ box ] 1.0, a pilot space roughly one-tenth the size of the fully realized program in the Richey-Mixon Building. Word spread quickly when the relatively tiny basement area opened in 2012; during the last academic year, the program drew 3,000 visits per month—about 20 percent of them from the broader community. The White House recognized think[ box ] in June 2014 as part of its first national Maker Faire, and universities across the country have sought Case Western Reserve’s advice regarding how to create a comparable effort.

“The success of Case Western Reserve’s Blackstone LaunchPad and think[ box ] programs illustrates just how much students can accomplish if provided guidance and opportunity,” Burton D. Morgan Foundation President and CEO Deborah D. Hoover said. “The university’s vision aligns well with ours, and we are eager to see this suite in think[ box ] filled with the ideas and energy of entrepreneurial aspiration and execution. These efforts not only benefit Case Western Reserve, but the broader economy as well.”

The other initiative to have a satellite office in think[ box ]’s Burton D. Morgan Suite for Entrepreneurship is the IP Venture Clinic, a program the law school launched in 2013 as part of its broader initiatives to build its intellectual property programs. The clinic provides free services for students and other interested entrepreneurs eager to protect their ideas and determine how best to bring them to market. Under the supervision of faculty, clinic students get to apply lessons from the classroom to actual situations involving contracts, incorporation, offerings and the like.

In 2014, The Burton D. Morgan Foundation committed $679,400 to support the clinic’s programs. With the new satellite space in think[ box ], law students and faculty will be able to engage with budding entrepreneurs right as they begin to develop and shape nascent ideas—rather than provide feedback after a start-up concept is well underway. At the same time, they also will have the opportunity to learn from experienced entrepreneurs and other advisers on hand to guide students in their efforts.

“At the Burton D. Morgan Foundation, we speak often about the vital importance of having an entrepreneurial ecosystem, a living, evolving effort that involves people from every part of the start-up process,” Hoover said. “We applaud Case Western Reserve’s integrated set of programs and its plans for a stunning new home for think[ box ]. The combination offers extraordinary opportunities for students, faculty and the Greater Cleveland community at large—and we are pleased to support their efforts.”