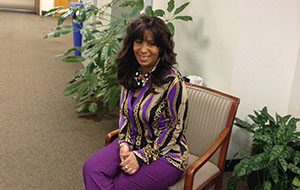 Arlicia Headd always offered the same response to anyone who asked how she was doing.

She would smile and say, “Just peachy!”

With those two words alone she would brighten your day.

Headd, a contract and compliance manager in the university’s Technology Transfer Office (TTO), passed away Wednesday, Nov. 11, after battling cancer since 2011. She was 52.

“Arlicia was part of the heart and soul of our office,” said Michael Haag, executive director of Technology Management. “She made us feel a little more like family, rather than a group of co-workers.”

Headd, a member of the TTO office since 2003, was known for bringing people in the department together and lifting their spirits. She continually focused on the needs of others—even while she was fighting for her life.

Friends and co-workers said Headd not only adored her own daughter Krystole, but also “adopted” their children as well. She collected photos of her colleagues’ sons and daughters and often displayed them in her office.

“If you were ever missing Arlicia at a company or office gathering,” Haag said, “you would most likely find her with the group of kids.”

Headd, a Regina High School graduate who attended Kent State University and Cuyahoga Community College, began working at the university as a receptionist in TTO and quickly advanced.

As a contract and compliance manager, she served as a liaison between faculty inventors and the federal government to make sure reports on patents and other documentation were filed accurately and on time.

Her friend Erica Paythress, a corporate relations coordinator at the university, recalled how they volunteered together for various campus service programs, such as Case for Community Day. The two of them would also look forward to their monthly lunches with TTO colleagues Joy Chen and Yana Katsevitch.

“She was always happy,” Paythress said. “She was the sweetest person you’d ever want to meet.”

Even after Headd was diagnosed with cancer, she continued to put others’ needs ahead of her own. Colleagues said she never let anyone notice when she was not feeling “peachy” and continued to work.

“Arlicia started going to a support group,” Haag said. “She shared with me that she did not find much utility in the meetings for herself, but was adamant about attending each week because she wanted to help the others in the group as much as she could.”

Headd was a member of and regularly attended St. Ann Church of Communion of Saints Parish in Cleveland Heights. She is survived by her daughter, her mother Earnestine Headd, two sisters, Shari Wynne and Maria Triplett, and her niece Amina Wynne.