They thought they had no chance.

After all, most of the 150-plus competitors comprising 22 teams in last weekend’s Cleveland Medical Hackathon at the Global Center for Health Innovation downtown were health professionals with PhDs and functioning prototypes of their inventions.

And all the Case Western Reserve University team of undergraduates had was an idea: a concept called CrasBand (pronounced crossband), a wrist device that monitors a person’s cardiac health in real time. 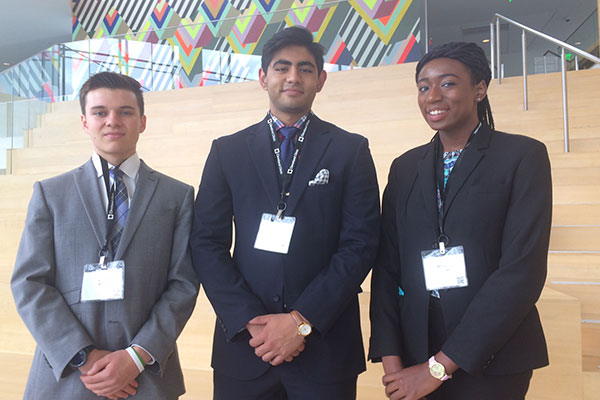 By random drawing, the team of Josef Scheidt, Rohan Sinha and Nsisong Udosen went first, presenting their five-minute “flash” pitch to a panel of seven judges representing the medical, legal and financial professions.

“After we presented, we almost left,” said Udosen, a second-year computer science and business management student.

“We were so sure we weren’t going to win,” said Scheidt, a first-year biomedical engineering major on the pre-med track. “We were like, guys, you just want to go home?”

But the CrasBand team stayed—and heard their names called as the competition’s winner. First place was $7,000 and an opportunity to also pitch their idea to an audience of medical and financial professionals at Cleveland Clinic’s prestigious Medical Innovation Summit immediately following the Hackathon.

“I was shocked,” Scheidt said.

“I guess the judges saw value in our product,” said Udosen, who spent all night coding to develop an analytics platform so they could demonstrate it during the next morning’s pitch.

Through a system of biosensors, CrasBand would transmit data on the wearer’s stress and oxygen levels and heart activity in real time to a software platform that compares the information to the person’s “normal” cardiac health levels. The device would then put out signals based on two thresholds—a non-critical warning sign and then a high-risk warning sign.

Inspiration for the device was personal: Scheidt’s grandmother has severe health problems and must be continuously monitored, leaving her no alone time. CrasBand might help people in that condition.

The team also includes Francesca McDonald, a first-year biomedical engineering/pre-med student, who participated in the Hackathon on Saturday before leaving for her varsity soccer game, and Rishi Maheshwari, a second-year computer science major who was unable to participate in the competition.

The team members originally met in August as participants in Entrepreneurship Immersion Week, an annual undergraduate entrepreneurship bootcamp sponsored by the Burton D. Morgan Foundation. In fact, many of the ideas that resulted in the CrasBand concept came during that weeklong event, where they also took first place.

They’re advised by CWRU LaunchNet Director Bob Sopko, who Sinha said put the team together and serves as “kind of a networking hub who is pretty much responsible for everything we do,” and Colin Drummond, professor and assistant chair in the Department of Biomedical Engineering and faculty director of the Master of Engineering and Management Program.

“Professor Drummond is largely our science guy,” Sinha said. “He imparts his knowledge and helps us with the technology and how to think out our product.”

They’ve also received input from more than a dozen industry professionals, including the Cleveland design studio SmartShape, which helped the team develop a cost analysis for their product. The team figures the device would cost $96, plus a $20 monthly service subscription fee.

And how will the $7,000 be used? Some of the prize money will cover costs associated with professional consultation and to possibly pursue a prototype.

“We’re just going to divide it among the team for right now,” Sinha said. “We’re at a stage where it helps that we’re so young because it’s impressive to judges, but it also hurts because we all have plans to not only finish our undergraduate education but pursue graduate degrees. So when you start a project this early, where we want to go with this idea is difficult to spell out right now. We really don’t even know.”