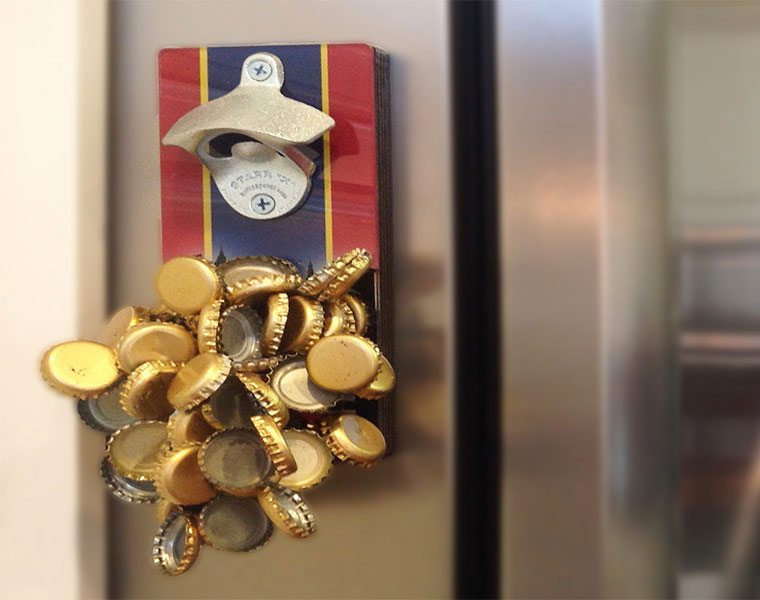 From tailgates and man caves to the family fridge

It began as a simple gesture of thanks.

Brian Tighe made a bottle opener for a friend’s grandfather to mount on the dock at his pond as a thank-you for letting him fish there.

Except the man really didn’t care for the gift, because it dropped bottle caps on the dock and into his pond.

So Tighe, 27, a 2007 University School graduate now in the first year of the full-time MBA program at Case Western Reserve University’s Weatherhead School of Management, found a solution to the littering problem and turned it into a business, called Cap-Stop. 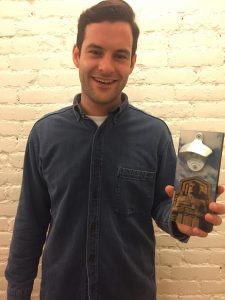 Brian Tighe, a full-time MBA student at the Weatherhead School of Management, is building his magnetic bottle opener idea into a growing business.

He makes and sells magnetic bottle openers that catch the caps as the bottles are opened. And they’re custom-designed to match a person’s pursuits and personality—adorned with colors and names of their favorite sports teams, famous sayings, even with images of their pets.

“Our magnetic bottle openers don’t just open your beers in a really cool way; they showcase your individuality,” the company’s website proclaims. “Since each opener can be customized with any design, they’re meant to express our interests, what we stand for, and who we are.”

Magnetic Cap-Stop openers can be stuck to a refrigerator or even the back of a truck or trailer for pre- and post-game tailgating.

“It began with family members and friends wanting them,” he said, “and it hasn’t stopped since then.”

Cap-Stop is not quite a year old. Tighe has since arranged to have his bottle openers carried in retail outlets and about 10 team shops of such sports franchises as the NFL’s Cleveland Browns, Buffalo Bills, Philadelphia Eagles and the Houston Rockets of the NBA.

With guidance from CWRU LaunchNET, Tighe has scheduled a 30-day Kickstarter campaign set to launch on Oct. 18. He hopes to raise $7,500 to build up inventory and speed the turnaround time of website sales.

“Most of our sales are done at trade shows and flea markets,” he said. “Our biggest challenge is translating that to more customers online.”

Tighe, who lives in Ohio City on Cleveland’s near West Side, builds the bottle openers in the basement of his parents’ South Euclid home. The handmade product is built with red oak, ingrained with strong “rare earth” magnets. Pre-designed openers cost $45. Custom orders, built with images customers provide, start at $55.

His best seller: an all-black “CLE” opener and his Browns-themed opener. (He can’t use league-licensed logos or names, but plans to apply for that.)

“Brian’s going to be a serial entrepreneur with these kinds of products,” said Gene Sasso, CWRU LaunchNet’s program manager. “We’ve seen this in the past with other LaunchNet clients—Brian has ambition and drive. And he has other ideas. Cap-Stop is only the beginning.”