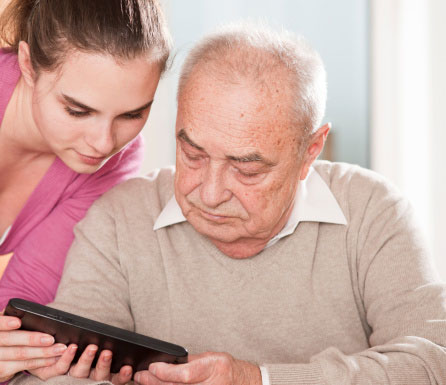 For his study, “The Impact of Tablet Usage on Social Engagement among Older Adults,” McCallum selected 25 senior citizens with an average age of 80 from 50 volunteers at an assisted-living facility. Each received a tablet and 90 minutes of training on the device for 15 straight weeks. They learned how to surf the Internet, email, post photos and create documents. Some had refresher courses as needed. None had previously owned or used the technology.

The participants reported primarily using their tablets to email family and friends outside their residential community, shop, and search for health information. These participants said they felt more connected to their families and friends.

All participants were tested before and after training for social support, feelings of loneliness, life satisfaction, depression, optimism, self-esteem and social engagement.

Meanwhile, the control group showed no change on study measures.

A positive sign of aging well is how socially connected an individual is, said McCallum, associate professor of psychology.

He explained that older people increasingly are using more technology, but many seniors who would benefit from the technology are still unfamiliar with how it works or anxious about using it.

McCallum found that older adults are able to learn new technologies effectively and, in the process, increase their overall engagement and connectedness with the world around them.

“Simply put, technologies that can combat isolation and increase socialization are rendered useless if older adults don’t use them,” he said. “Older adults can learn to use new technologies. They generally need to be introduced to different uses of a computer more slowly than younger folks, but only because of the sensory, cognitive and physical deficits associated with aging.”