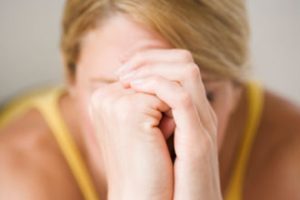 Negative thinking is a red flag for clinical depression. Stopping such thoughts early on can save millions of people from mental illness, according to a research study from the Frances Payne Bolton School of Nursing at Case Western Reserve University.

Jaclene Zauszniewski, the Kate Hanna Harvey Professor in Community Health Nursing and associate dean for doctoral education at the school, has developed a brief eight-item survey to help healthcare providers identify depressive thinking patterns that may lead to serious depression if not identified and addressed early.

“Clinicians need guidelines and measures to know when negative thinking has reached a tipping point and has begun to spiral into clinical depression,” she said.

The DCS has been used effectively to screen for more serious depressive symptoms in persons in the U.S. and around the world, but the researchers wanted to take it further and determine the point at which negative thinking establishes a pattern for the onset of clinical depression—even without other emotional expressions or body symptoms associated with depression.

In a study of 629 healthy adults from 42 states who responded to questions through the Internet survey, they found the answer. Participants ranged in age from 21 to 84 years, and 70 percent were women; women make up the majority of depression sufferers. The majority of the participants were college educated and had incomes greater than $40,000.

For this study, the researchers compared DCS scores to the Center for Epidemiologic Studies Depression Scale (CES-D), which is recognized as a “gold standard” measure for identifying clinically significant depressive symptoms. Their goal was to determine a cut score on the DCS that would represent the point at which individuals may benefit from learning ways to change negative thinking in order to prevent serious depression.

They found that a score of 7 on the DCS would be that point at which individuals should begin initiating strategies to change negative thoughts into positive ones. The findings also showed that at this cut score, the DCS accurately differentiated between persons with and without clinical depressive symptoms as determined by the CES-D.

Zauszniewski and Abir K. Bekhet, a researcher from Marquette University in Milwaukee, report their findings in Issue 34 of the Western Journal of Nursing Research article, “Screening Measure for Early Detection of Depressive Symptoms: The Depressive Cognition Scale.”