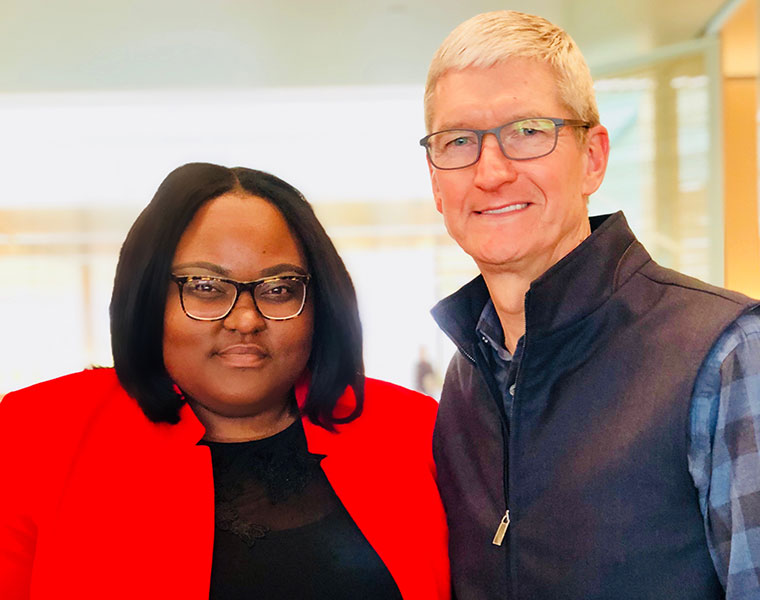 Courtesy of the Weatherhead School of Management

Shanelle Smith is one of those people you just know is going places. She’s enrolled in the Weatherhead School of Management’s full-time MBA program and works (full-time) as the state director at The Trust for Public Land, a national nonprofit land conservation organization.

And, after a courageous tweet to a hero of hers, Lisa P. Jackson, the vice president of environment, policy and social initiatives at Apple who also served as the EPA Administrator in the Obama administration, she did go places: Apple headquarters in California.

That’s right. After an afternoon that included a leisurely trip to Cleveland’s West Side Market and an afternoon nap, Smith awoke to a response.

“And that was it,” said Smith. “We talked on the phone that following Sunday and she organized for me to fly out to San Francisco.”

Smith has spent almost 10 years working on environmental issues at the local, state and federal levels in the nonprofit and government sectors, but has aspirations of one day working in corporate sustainability. She was originally drawn to the Weatherhead School’s MBA program (she also has master’s in political science) because of the school’s Fowler Center for Business as an Agent of World Benefit. So the opportunity for Smith to shadow someone whom she’s long admired, working in a sector she hopes to transition into, was, as Smith put it, “pretty extraordinary.”

When Smith finally visited Apple’s corporate headquarters, or “Apple Park,” she followed Jackson from meeting to meeting, interfacing with other senior VPs and experiencing how Apple thinks about strategy and design and the roles it plays in the world. And, she also got to meet Tim Cook.

After the trip, Jackson offered to be Smith’s mentor, and Smith eagerly accepted. A few months later, Jackson had nominated Smith as one of 50 young professionals who would change the world for the news site Grist. These “fixers,” as the site calls them, are “cooking up the boldest, most ambitious solutions to humanity’s biggest challenges.”

“It wasn’t a surprise that she nominated me but what was a surprise were the words that she said about me,” said Smith. “That really gives me something to live up to. I thought, ‘wow this person who I’ve looked up to for so many years, really thinks this highly of me…no pressure!’”

Smith made the “50 fixers” list and was included in the publication with Jackson’s write up, which described Smith as, “passionate, driven and smart.”

Smith is all of those things and says she was able to focus her ambitions in her Leading People and Organizations (LEAD) course at the Weatherhead School, taught by faculty member Ellen Van Oosten. The course centers on self-assessment and finding personal strengths and weaknesses.

“Professor Van Oosten really urges us to think about what our vision is for our life,” said Smith. “Mine is to shoot every shot. I just sent that tweet out into the universe and I didn’t know what was going to happen. It has come back to me tenfold. That class forced me to think beyond what was in front of me and to really go for it.”