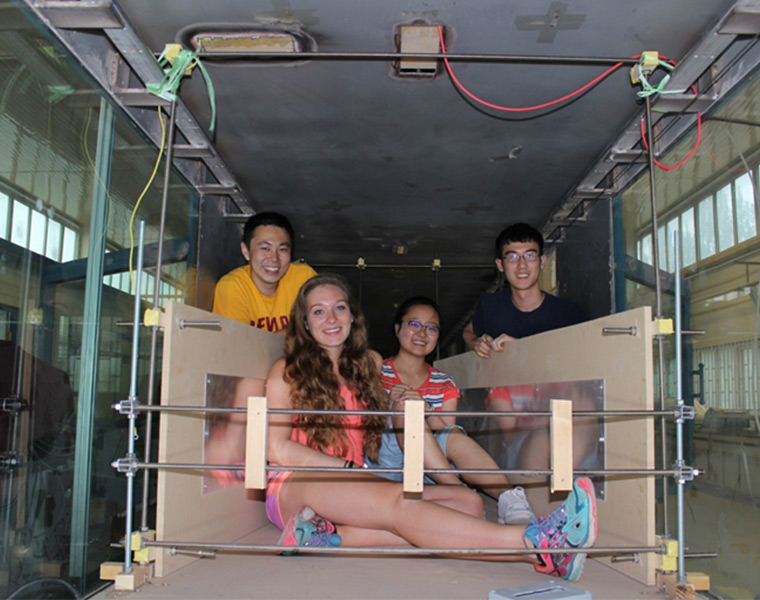 A trio of Case Western Reserve University students this summer began a three-year research project in a western China wind tunnel that could play a role in advancing our understanding of electrostatic charging.

They also managed to eventually order dumplings and noodles at a local tea house by more than just pointing and using minimalist Mandarin.

They stayed through July, leaving behind a ready-made research station at the university for a second-year cohort next summer under a project funded by a $250,000 National Science Foundation grant.

The grant was awarded to Daniel Lacks, department chair and C. Benson Branch Professor in Chemical and Biomolecular Engineering at Case Western Reserve, and R. Mohan Sankaran, the Leonard Case Professor of Engineering, who are overseeing the project.

CWRU students and their Lanzhou University collaborator work inside the wind tunnel.

Both the professional and personal accomplishments were outcomes worth celebrating from the first year for CWRU students visiting Lanzhou, Sankaran said.

“We’re thrilled with it so far because the goal of the grant is not just the research itself, but also the experience for the students—the international stay and working with an international university,” he said.

“Dan and I think this gives students a great opportunity to go somewhere where they don’t get a westernized, Americanized experience, but more of a local exposure.”

The three students not only conducted a successful series of electrostatic experiments in a mock sandstorm in the wind tunnel, but said they also discovered the depths of their own resourcefulness by building their experimental apparatus purely from scraps and spare parts.

“That might have been the most fun,” said Wang, whose parents are Chinese and said he knew the most among them about local customs. “We learned about this marvelous street behind the university where a bunch of small electronics hardware shops are strung together. Inside, they had shelves just full of wires and parts piled on top of each other.”

From that, Wang engineered the equipment—essentially giant electrodes for separating particles by charge, a Faraday cup or box for recording the positive and negative charges, and collection equipment for gathering the sand at the end of the wind tunnel, about 150 feet long by 4 feet wide.

They also managed to find other locations to gather ingredients to prepare a homemade spaghetti dinner for a Chinese neighbor who asked them to teach English to her son and friend.

“That was a lot of fun, and it was nice that she befriended us and that we could share our culture with them,” Phillips said.

Gil said the experience also inspired him. “There’s a whole field of sand science that I didn’t even know about,” he said. “But it’s parallel to what I’m studying, so I’m really interested in it.” 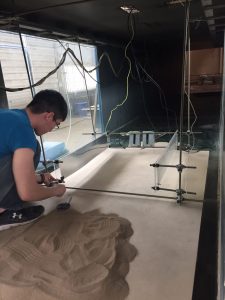 The student research is an extension of the two professors’ research on triboelectric charging, or static electricity, over the last decade.

“We actually know very little about electrostatic charging, fundamentally,” Lacks said. “Surprisingly, the science behind it is totally unclear. We don’t even know, for example, what is being transferred, electrons or ions, when you experience static electricity like when you rub a balloon.”

There’s also a serious side to static electricity because the charges can spark dust explosions in coal mines or even in sugar or flour-processing plants.

Further, the “electrostatic charging that occurs in wind-blown dust can be very dramatic,” said Lacks, citing literature about the Great American Dust Bowl, which describes car radios shorting out, people knocking each other over when they made contact with a handshake and other peculiarities during dust storms.

Lacks and Sankaran had studied dust storms and done lab-scale desktop experiments, but when Lacks saw the wind tunnel at Lanzhou during a 2015 speaking engagement, he got an idea.

“We were thinking it would be really cool to do experiments on charging in dust storms with a facility that could simulate dust storms, and although this one is used mostly for aerodynamics, we thought it could be used to create a mini dust storm,” Lacks said. “So, we made the grant request and worked out a collaboration with Lanzhou University.”

Sankaran said the wind tunnel has become “a stepping stone from the lab to the field” because it more realistically mimics when particles collide—in a dust or sand storm or in an industrial facility.

“And these three really helped us get there by building this from scratch and getting it ready for the next group,” Sankaran said. “They had no choice but to be adventurous, both on the job and for dinner.”