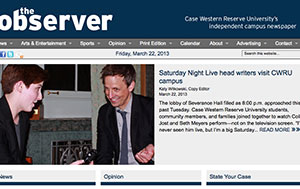 The first-ever online distinction for The Observer was presented at the annual ACP National Journalism Convention in San Francisco, which was attended by The Observer’s executive editor Tyler Hoffman, news editor Greg Bokar and news design editor Meilyn Sylvestre.

This ranking largely can be attributed to the overhaul of the publication’s website over the past year, according to Hoffman. The Observer switched vendors, contracting School Newspapers Online to host and provide the initial framework for the website. From there, former web manager Michael DiMauro and current web manager Kyle Patterson customized, populated and expanded the website to its current form.

In addition to the more convenient and expansive format, the website has helped connect the paper with the campus community. Sections such as the weekly “State Your Case” poll, which polls the CWRU community on relevant issues, have become weekly columns, reflective of the community’s voice. As the website is updated regularly, readers also can be updated on pressing news daily, rather than exclusively through the weekly publication.

“Rebuilding our website offered us a way to engage with our audience in new ways, and to gain national recognition for it so quickly will encourage us to further expand our online presence,” Hoffman said in a press release.

“For the first time in recent history, other schools are viewing The Observer as a model for what they can accomplish with their own college media programs,” Hoffman said. “It’s truly a testament to the loyalty of our readers, to the work of our creative team, and to the university whose story we continue to tell.”