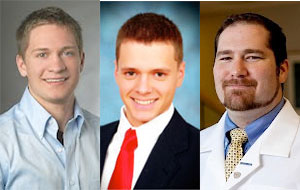 There, the pitch by company CEO John R. Lewandowski, who opened with the line, “What if I told you I could save 1 million lives every year with just refrigerator magnets and a laser pointer?” got raves and a replay on Fortune magazine/CNN online. 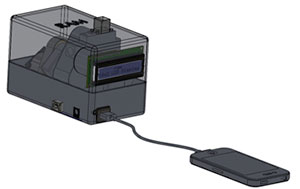 The team’s product, based on those common items, is a hand-held device that detects a magnetic substance that malaria parasites release when digesting red blood cells. The Rapid Assessment of Malaria device, called RAM for short, can provide a faster and more accurate diagnostic test than those used now, at a lower cost of about 20 cents per patient, the team members say.

Lewandowski, the founder of DDG, is earning his master’s in engineering and management and has teamed with his brother Mark, a first-year student who plans to major in computer science and accounting, the company’s CFO. They are the sons of John J. Lewandowski, the Arthur P. Armington Professor of Engineering II in the Department of Materials Science and Engineering.

The third team member is Brian Grimberg, an assistant professor of international health at the School of Medicine, who is one of the device inventors, startup co-founder and president. Grimberg also leads an international and interdisciplinary team of experts investigating malaria treatment and prevention options in countries around the world.

The team has worked with a long slate of researchers across campus to create, test and build prototypes of the device.

“There are currently an estimated 1 million deaths resulting from malaria infections every year, and 95 percent of those are children under the age of 5,” Grimberg said. “If we could accurately detect all the malaria infections in the world and then quickly deliver treatment, there would be almost no deaths from this parasite.”

Today, diagnosis is confined to government or NGO-run clinics that require either a highly trained microscopist onsite to determine the presence of the disease-causing parasite, or the Rapid Diagnostic Test, which is similar to a pregnancy test, and generally requires refrigeration. In either case, patients walk, sometimes for days, to be tested at a malaria clinic.

“With something like our device, we can take our diagnosis method directly to the patients for the first time,” Grimberg said. “This would greatly increase our ability to detect malaria infections.”

John R. Lewandowski approached Grimberg about condensing the technology into a handheld device and bringing RAM to market. He had become interested in combating malaria as an undergraduate, designing a low-cost evaporative cooling system for bed nets distributed in Sub-Saharan Africa as part of an undergraduate design project in the Case School of Engineering. The nets were underused because they trapped stifling heat.

“The beauty of the RAM device is its ability to balance social impact and financial profitability,” Lewandowski said. “At every competition or showcase, our device stands out because of that unique combination.”

Disease Diagnostic Group LLC won $10,000 in cash and $30,000 worth of mentoring and advisory services in the LaunchTown competition finals Wednesday. They beat out two other Case Western Reserve entrepreneurial teams: NanoHarv Technologies, which has developed a system for harvesting and dewatering microalgae for clean energy or other uses, and Hole Patch LLC, makers of quick and easy temporary pothole repairs. The LaunchTown competition also included 26 other startups from the University of Akron, Kent State, Cleveland State and Youngstown State universities.

Mark Lewandowski, who is also working as a tech specialist in the university’s IT department, has helped develop the company’s financial statements and business model. He’s now planning the future development of the RAM’s supplementary iPhone app to store the diagnosis and map the distribution of the disease, to improve the current poor recordkeeping and increase efficiency of treatment and prevention efforts including bednet distribution.

The project has received support from a host of disciplines.

The other inventors of RAM are from the Case Western Reserve physics department, including Distinguished University Professor Bob Brown, research associate Bob Deissler, former director of physics laboratories Bill Condit, mechanical designer Rick Bihary and technician Jason Jones, who began working on the project as an undergraduate student in 2011.

The team received advice and assistance from the MEM program, the Functional Electrical Stimulation Center, departments of mechanical and aerospace engineering, materials science and engineering, and biomedical engineering, the Tech Transfer Office, the law clinic, the Center for Global Health & Diseases, think[ box ] and more. Funding from the Coulter-Case Foundation and the Clinical and Translational Science Collaborative enabled the team to test ideas and build prototypes.

The Lewandowskis and Grimberg will discuss the RAM device at the launch of the Blackstone LaunchPad at CWRU, at Kelvin Smith Library, Tuesday, April 23, at 1 p.m. They’re scheduled to attend a National Collegiate Inventors and Innovators Alliance entrepreneurship workshop in Boston this week and compete for $25,000 in a business plan competition at the University of Washington later this month.