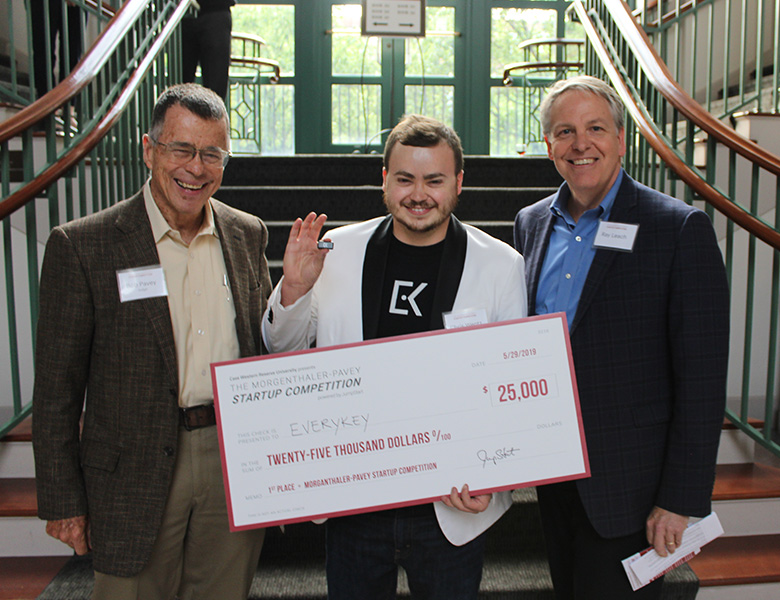 Everykey, a Cleveland-based creator of apps and devices to replace passwords for mobile and network security, won the $25,000 top prize at the second annual Morgenthaler-Pavey Startup Competition.

With more than 50 entrants—twice as many as in its inaugural year—the contest is open to startups with at least one current Case Western Reserve University student or recent alumni. The competition is supported by a spate of entrepreneurial organizations and venture capitalists who provide free and discounted legal, accounting and marketing services to help its finalists.

In late May, after nearly six months of preparation, the contest’s six finalists recently pitched to a professional panel of investors on campus.

“Each startup proved to be so strong that our judges had a particularly tough time choosing—which is a great problem to have,” said Scott Shane, A. Malachi Mixon III Professor of Entrepreneurial Studies at the university’s Weatherhead School of Management.

Jumpstart, the Cleveland nonprofit that supports and invests in Ohio-based tech startups and is a contest co-sponsor, “kicked in an additional $10,000 for our third-place tie,” Shane said. “This is exceptional generosity.”

With its winnings, Everykey plans to pursue a new strategy: business-to-business sales; until recently, the company has sold directly to consumers.

“We believe we can help companies avoid spending the billions of dollars now required to address password mismanagement, which is the top cause of security breaches,” said Chris Wentz, Everykey founder and chief executive officer, who graduated from the university in 2013 with a computer science degree.

Now four years old, Everykey offers a range of password-replacing software and hardware, compatible with all major operating systems and devices, that can lock and unlock a user’s phone, laptop, tablet, doors and other security-controlled devices and access points.

In hiring employees for its new business strategy, Wentz will continue a tradition of recruiting from his alma mater: Eight of the startup’s 10 in-house employees are university alumni.

The runner up was Nexus A.I., a cloud-based platform that uses artificial intelligence to power workforce planning and deployment. Phil Alexander, CEO and founder, is a 2012 university graduate, with an MBA from the Weatherhead School.

YeuPatch sells the Thump Pad, a reusable shock-absorbing pad for immediate, temporary pothole repair. Its CEO, David Yeu, earned a bachelor’s degree and a master’s in accounting from the Weatherhead School.

Boundary Labs creates energy sensors that capture vibration signals from industrial machines that can be interpreted by the company’s software to find inefficiencies and offer fixes to optimize manufacturing operations. Its founder, Prince Ghosh, is a Class of 2019 graduate in mechanical and aerospace engineering undergraduate student.

Quanterra, led by Shoshana Ginsburg, a 2015 PhD graduate, creates software tools for automated analysis of aerial images. Seeking to aid the entrepreneurial efforts of female and minority founders, the new award was established by the Joe and Elizabeth Mandato Family Fund.

In partnership with the state-funded Ohio Third Frontier, Jumpstart provided the contest’s prize money and also helped finalists hone their pitches for competition’s final round.

Support from these organizations will continue for the contest’s winners, who will also be provided six months of free office space at a new co-working building under construction in Cleveland by the co-sponsor Finch Group.

“Of all competitions we’ve ever won, this is the most meaningful—especially to be acknowledged and recognized by people we respect,” said Wentz. “This contest says a lot about the region’s efforts to boost its startup culture.”

The competition honors the memory of David Morgenthaler, a titan of the American venture capital industry who was president, chairman or director of more than 30 companies and was among the earliest venture capitalists to back legendary tech startups such as Apple and Nextel.

Last fall, Shane’s entrepreneurial finance class narrowed the 50-plus entrants to six finalists. The contest takes a novel approach: placing students on both sides of the startup financing process.