Astronomers have been keenly peering into M51, or the Whirlpool Galaxy, since the 1800s, its signature spiral structure informing the earliest debates over the nature of galaxies and the Cosmos at large.

But no one—not with the naked eye or with increasingly powerful modern telescopes—has ever seen what Case Western Reserve University astronomers first observed using a refurbished 75-year-old telescope in the mountains of southwest Arizona.

“I literally looked at the image and said, ‘What in the world is that?’” said Case Western Reserve astronomy professor Chris Mihos.

What it was turned out to be a massive cloud of ionized hydrogen gas spewed from a nearby galaxy and then essentially “cooked” by radiation from the galaxy’s central black hole.

Mihos and a trio of collaborators—led by then-graduate student Aaron Watkins, and including Case Western Reserve Observatory Manager Paul Harding and University of Wisconsin astronomer Matthew Bershady—wrote about the discovery in May in the journal The Astrophysical Journal Letters.

The discovery of the giant gas cloud, first observed by Watkins in 2015 and announced by Mihos on Twitter in April, potentially provides astronomers around the world with an unexpected “front row seat” to view the behavior of a black hole and associated galaxy as it consumes and “recycles” hydrogen gas.

“We know of a few clouds like this in distant galaxies, but not in one so close to us,” Mihos said. “This gives astronomers a great opportunity to study up close how gas is ejected from galaxies and how black holes can influence large regions of space around those galaxies.” 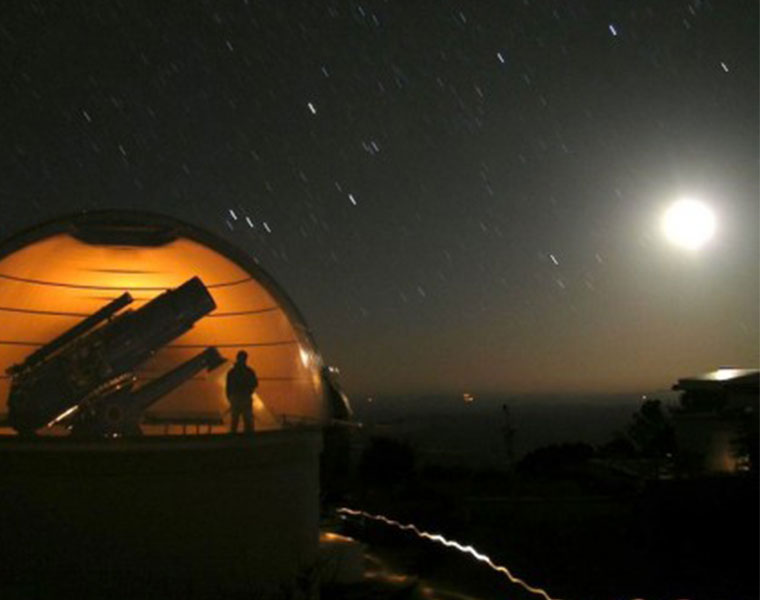 But how did Case Western Reserve scientists find something others had missed?

In part, because they looked in the right spot with the right equipment—and then enlisted the help of a colleague to confirm it with additional data.

Although smaller and older than most telescopes on Kitt Peak, the Case Western Reserve telescope is also constructed in a way to provide a wide field of view, while also keeping out unwanted stray light.

That allows astronomers to see things others don’t: diffuse patches of light that are “over 100 times fainter than the blackest night sky you can imagine,” Mihos said.

“What our telescope really does well is measure that very diffuse, low surface brightness light emitted by gas or stars around a galaxy,” Mihos said. “It’s a wonderful telescope, and it has allowed us to make world-class advances in studying the faint outskirts of galaxies.”

Mihos said Watkins, now doing his post-doctoral work in Finland, had originally been imaging the Whirlpool to map the faint streamers of starlight torn off by the collision between the galaxies. Thinking there might also be gas in those streamers, the team fitted the telescope with a special filter to see hot, ionized hydrogen gas, which gives off a specific wavelength of light.

“Finding stars is relatively straightforward, but gas doesn’t shine at all wavelengths,” Mihos said. “That’s one of several reasons why no one had ever seen this before—earlier studies using these kind of hydrogen filters to look for ionized gas couldn’t detect emission this faint and over such a wide area around the Whirlpool to see what Aaron found.”

But there was still one thing to double check: “Our worry was really what I would call ‘the dirty windshield analogy’– what if we were actually seeing a diffuse cloud of gas right in front of us in our galaxy and it wasn’t really part of M51?” Mihos said. “We could figure that out if we know how fast it was moving—does it move slow like clouds in the Milky Way, or much faster like those in M51?”

The CWRU astronomers teamed up with University of Wisconsin astronomer Matthew Bershady to use the nearby WIYN Observatory to confirm the cloud’s association with M51. The WIYN 3.5-meter telescope was equipped with an instrument capable of taking a detailed spectrum of the cloud to measure its speed.

“We needed to know whether that cloud was moving at ‘Milky Way speed’ or ‘M-51 speed,’” Mihos said. “Once Aaron and Matt had taken the spectrum of the cloud, they were able to tell how fast it was moving away from us, and we immediately knew it was part of M51, not something in our own back yard.”

The making of stars

The discovery’s role in more clearly understanding how galaxies eject and “recycle” their gas and stars,” Mihos said, will be determined in the coming years as more researchers dig into information that had been there all along—even if unseen until now.

“We need a lot more data to tell this tale fully, for sure, and this is one of the most well-studied galaxies out there,” he said. “So, we have a chance to better understand what is happening in the Whirlpool, which informs and affects how we understand everything else about how it has evolved over time.”

This article was originally published May 16, 2018.

“The Unlinking of Language and Puerto Rican Identity: Reflection of the Power of the Diaspora”