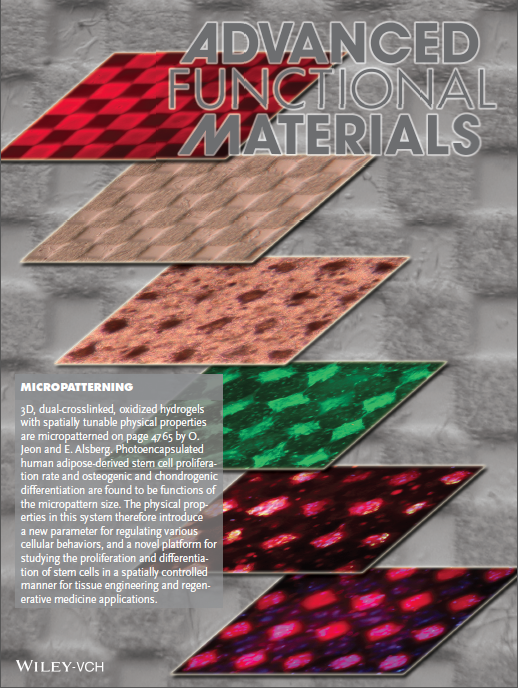 Scientists know that physical and biochemical signals guide stem cells to become muscle, blood vessels or bone. But the exact recipes to produce the desired tissues have proved elusive.

Now, researchers at Case Western Reserve University and Washington University School of Medicine have taken a step toward identifying that mix by developing an easy and versatile way of forming physical and biochemical gradients in three dimensions.

Ultimately, the goal is to learn to manipulate stem cells to repair or replace damaged tissues and organs.

“If we can control the presentation of signals, we may be able to enhance and initiate cell repair and tissue formation,” said Eben Alsberg, associate professor of biomedical engineering at Case Western Reserve and senior author of the research. “A lot of tissues form due to gradients of signals: gradients of growth factors, gradients of physical triggers.”

Presenting signals in three-dimensional space is a key to engineering complex tissues, such as repairing a torn meniscus, the cartilage pad between bones in the knee, Alsberg said.

“There must be a transition from bone to cartilage,” he said, “and that may require control over multiple signals to induce the stem cells to change into the different kinds of tissues where you need them.”

In their first test, the researchers found that stem cells grew into cartilage or bone in a near-linear fashion according to gradients of two growth factors: one that promotes cartilage and another that promotes bone.

The stem cells were placed in a solution of alginate hydrogel, a jelly-like material made of water-loving three-dimensional networks of water-soluble polymers. The solution was divided between two computer-controlled syringe pumps.

The researchers then tied the growth factors into hydrogels that, when exposed to light, released them. This enabled them to prolong the exposure of stem cells to growth factors and further control the differentiation into bone or cartilage.

In a test of physical signals, the researchers modified the hydrogel solutions with a gradient of peptides that form what are called adhesion ligands, molecule strings that hook the stem cells to the surrounding medium. After two weeks of culturing the cells, they found the highest number where the concentration of ligands was highest.

In a second test, they created a gradient of crosslink density within the hydrogels. Crosslinks provide structure to the gels.

The lower the density, the more flexible the hydrogel; the higher, the stiffer the gel. After two weeks, most cells were found in the most flexible gel. The flexibility allows for more free flow of nutrients and removal of harmful wastes, Alsberg explained.

Both physical signals can be controlled further by making them responsive to light, providing another avenue of control, the researchers say.

“This is exciting,” Alsburg said. “We can look at this work as a proof of principle. You can use any growth factor and any adhesion ligand that promotes any kind of tissue growth in this way. In time, we’ll put all the different parameters in one system to investigate those gradients.”

If the technology enables them to unravel recipes that generate complex tissues, the biodegradable hydrogel mix could be implanted or injected at the site of an injury, the researchers say. The recipe would guide cell behavior until new tissue is formed, restoring function.