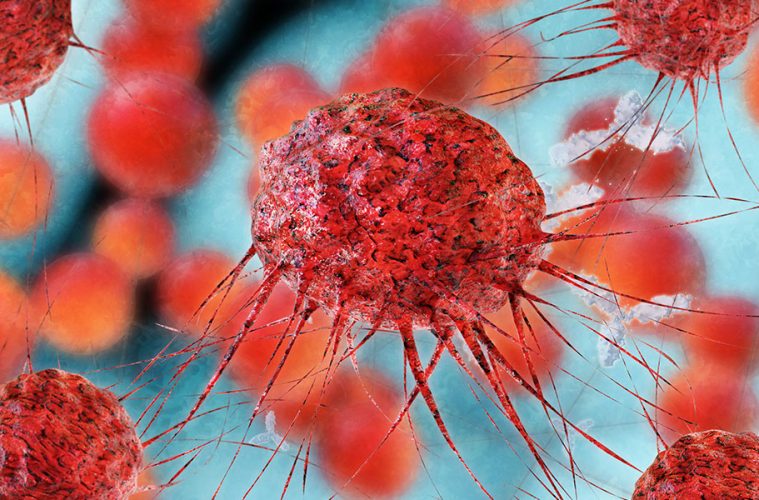 Shape of prostate and compartments within may serve as cancer indicators

Preliminary computerized imaging reveals the shape of the prostate and a compartment within the gland—called the transitional zone—consistently differ in men with prostate cancer than those without the disease, according to new research led by Case Western Reserve University.

The finding may provide a new avenue to diagnose the disease—perhaps even the cancer’s aggressiveness.

The differences held up in comparisons of magnetic resonance imaging (MRI) scans of 70 patients. The scans came from three different medical institutions in Ohio and two in Sydney, Australia, on different makes and models of MRIs.

The research is published in Scientific Reports.

“Looking at shape is a fundamental shift from looking at the intensity of pixels in an image to predict if a patient has prostate cancer,” said the Anant Madabhushi, F. Alex Nason professor II of biomedical engineering and leader of the research. “Pixel intensities vary, but shape is resilient.”

Variability in MRI scans can result in disagreement as to whether prostate cancer is present, in turn potentially resulting in unnecessary biopsies and treatments. The American College of Radiology and others are working to develop standards to eliminate inconsistencies in imaging. 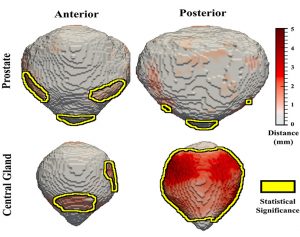 Atlas-based population analysis revealed differences in the shape the prostate and its subregion, the central gland, between normal and malignant prostates. Prostate cancer seems to induce significant changes in the shape of the prostate apex, while benign prostatic hypertrophy appears to drive the differences observed on the posterior side of the central gland for patients without cancer

“Here, we potentially have an image-based biomarker for prostate cancer, which is not greatly sensitive to the MRI parameters used by each institution, the maker of the MRI or the scanner itself, ” Madabhushi said.

The researchers then aligned the two frames and controlled for size—tumors and a noncancerous condition, called benign prostatic hyperplasia (which some images in this study showed), increase the gland’s volume.

Comparing cancerous and cancer-free prostates showed clear, statistically significant differences in both the shape of the transitional zone—which is in the central part of the gland—and the gland itself.

The researchers analyzed and compared the images from each of the five medical institutions and found that, no matter where the images were from, differences in shapes between cancerous and cancer-free prostates were consistent.

Madabhushi said that if shape proves to be a reliable marker of cancer, it could be combined with radiomics, which employs computer algorithms to extract differentiating features in cancerous and non-cancerous tissues.

In a paper published in the December issue of the Journal of Magnetic Resonance Imaging, Madabhushi and colleagues found they could accurately identify cancer by the microarchitecture and heterogeneity of the tumor in the prostate’s peripheral zone, which is the area surrounding the transitional zone.

As with shape, the peripheral zone features held up across the institutions in Tuku, Finland; Sydney, Australia and New York City that contributed MRI scans in this study.

As a follow-up, researchers are now working to identify radiomic features from the peripheral and transitional zones along with measurements derived from the prostate shape to use as predictors of whether a patient has cancer or not.

Further, they are trying to determine whether shape can also predict if the cancer is aggressive or slow-moving—a key in determining how the disease is treated.

This article was originally published Feb. 1, 2017.