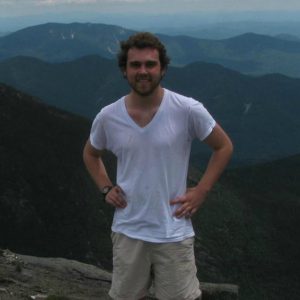 The Case Western Reserve senior describes sitting with his mother in her living room, listening as “she opened up to me for the first time about the intricacies and pain that go along with her continuing battle with cancer.”

On Aug. 31 of this year, less than a week before John’s book was published, Cindy Brogan (WRC ’80; MGT ’85) succumbed to the disease at the David Simpson House of the Hospice of the Western Reserve.

During the months in between, John saw his mother demonstrate tremendous bravery, endure enormous pain, and derive profound joy from spending time with friends and loved ones.

“Just hanging out with them and having a laugh, that meant the world to her,” John recalled this week. “That actually made her feel better. She just wanted people to be happy.”

With this book, John has a similar aspiration. In recounting travels to seven national parks and forests from Pennsylvania to Utah, he aims to illustrate how nature offered solace amid his sorrow. At the time, he wasn’t entirely sure why he would head to one spot or another—just that he should.

Time amid trees and atop mountains provided respite from the stress and worry of caregiving. Open spaces allowed him to relax and experience nature’s restorative power. And, finally, they encouraged him to share his story with others.

“I want people to finish it and feel optimistic—to feel good,” John said of his book. “I want them to feel like there’s an ability … to survive and flourish in this world that we all have.”

John didn’t begin the work with a goal of influencing others. He didn’t even plan on writing a book. One evening last spring he was completing a project for one of his cognitive science courses. His paper, which was supposed to be scholarly, focused on national parks and their significance to U.S. society. As he labored late into the night in his mother’s house, he thought an example from his own experiences might strengthen his argument about the need to protect such treasures.

“So I start writing it and it just starts spewing out,” John recalled. “I was literally writing one night and I looked at it and I said, ‘Holy [cow], this is 30 pages. I’m going to keep writing.’ I wrote the whole first draft in about a month.”

A prolific poet, John told his mom that he thought of the entire book as one long poem. As with those briefer pieces, he approached with no set idea or structure, but instead simply to let the words flow. As with the seven trips, he trusted his instincts to guide where he went—and how he got there.

“A lot of times when I write,” he explained, “I’ll realize what I’m thinking by having written it. I’ll read it and I’ll say, ‘Oh, that’s how I think.’ It’s definitely therapeutic for me.”

John’s mother raised him on her own. She first battled cancer when her son was 5—too young to understand or to assist. During that time, she reluctantly sent him to her parents’ farm for a summer, and later, on some weekends. John found much to dislike there, but also discovered the depth of his connection to the outdoors.

“… the land itself comforted me,” he writes in the book. “The sound of the creek running through our property reminded me that life is always moving…

“The happiness and identity I created in the farmland gave me an early appreciation of the concepts embedded within all natural ecosystems.”

Little wonder, then, that he works with Case Western Reserve’s Office of Sustainability. He also spends time at his mother’s school, working in external relations at the Weatherhead School of Management.

Decades earlier, Cindy Brogan had applied her degrees in accounting and business administration for extraordinary ends. As Distinguished University Professor Hunter Peckham recalled, she extended a position at the university’s office of research to become the organizational leader for the creation of the Functional Electrical Stimulation Center. With her strategic guidance, Peckham recalled, the university, MetroHealth Medical Center and the Louis Stokes VA Medical Center came together and persuaded major regional, state and national organizations to invest in their effort.

“Cindy impacted our directions on multi-institutional collaboration, translational research, and corporate partnership before people even understood what these words meant!” Peckham wrote in a remembrance of his one-time colleague. “[She] was a force to be reckoned with, for sure.”

After a long career advancing medical technology, Cindy founded her own company, OsteoSymbionics, in 2006. The start-up developed craniofacial implants for skulls damaged through injury or congenital defects.

“I don’t think there is more rewarding work,” Cindy explained in a 2012 profile. “I’m a perfectionist. I want the best. I want to feel we have done the best thing possible for that patient and for the surgeon.”

As a boy, John sometimes resented the time his mother spent assisting other companies and building her own. But as a young adult, John began to realize those efforts were, in large part, on his behalf.

“What I learned was how hard she worked to be able to give me the best life I could have,” he said. “Everything she did, I would say, was out of love for me.”

After finishing In Reflection of Nature, John has begun a novel. He also continues to write poems, some of which he shares on his blog, johnbroganwrites, along with striking photographs of some of the parks and other places he’s visited.

On Wednesday, Sept. 2, he posted “The Last Night at Hospice.” It opens:

She puckered her chin,
Clenched her lips,
In the normal routine
Before she spoke.

Brogan goes on to describe his mother struggling to speak, failing, then seeking his face.

But know that a mother’s love
Need not be expressed

More so than the puckering of a chin,
And opening eyes,
For a fraction of a second.

In Reflection of Nature can be found on amazon.com.

John Brogan’s blog can be found at johnbroganwrites.wordpress.com/