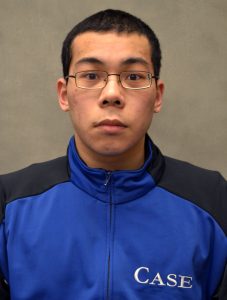 Wu, from the Woodhaven neighborhood of Queens, New York, arrived at Case Western Reserve in 2012 after graduating from Stuyvesant High School, an elite specialized secondary school in New York City. While at Stuyvesant, Wu earned varsity letters in football and track and field, and received a Congressional nomination to the U.S. Military Academy at West Point.

During his first semester on campus, Wu worked as a cook at The Jolly Scholar and volunteered at University Hospitals. He also was a sprinter on the university’s track and field team, and in the winter semester began working as a music assistant in the Denison building—a position he held for the next 20 months. Wu himself played the trumpet.

In the summer after his first year at Case Western Reserve, Wu began assisting on with research at MetroHealth Medical Center involving patients who had suffered strokes. The project used EMG (electromyography) signals to determine the effects of treatments to improve the function of patients’ shoulder muscles. Wu continued this work during the fall and part of the winter semester, and also spent a second year on the track and field team.

Wu, who was minoring in electrical engineering, earned academic honors during four of his semesters, and was a member of Alpha Eta Mu Beta, the national biomedical engineering honor society. His coursework spanned a broad range of classes, including such subjects as modeling of biomedical systems, linear circuits and instrumentation, thermodynamics, object-oriented programming and multivariable calculus.

In December, Wu presented his senior capstone as part of a six-student team participating in the fall semester’s Intersections symposium and poster session. The biomedical engineering project was titled “Worn Arm Support for Stroke Patients,” and involved a device designed to ease patients’ ability to manage everyday tasks.

While different supports already are on the market, the students noted, many are difficult to put on for those with physical impairments common after strokes. As a result, even potentially useful supports end up being ineffective because frustrated patients stop using them. The students’ device sought to address this issue by using a single strap design to ease fastening the supporting to the shoulder. In addition, the device included a mechanical system—including a spring structure—that provides upward force to help a patient lift the affected arm.

Wu is survived by his parents, Donna and Guoyao Wu, and a brother, Barry. His funeral will take place in New York, but a date and time have not yet been scheduled. the daily will provide additional information as it becomes available.

For students on campus, University Counseling Services offers walk-in appointments and can be reached at 216.368.5872. Faculty and staff can speak with a counselor by contacting the university’s EASE program at 216.241.3273.