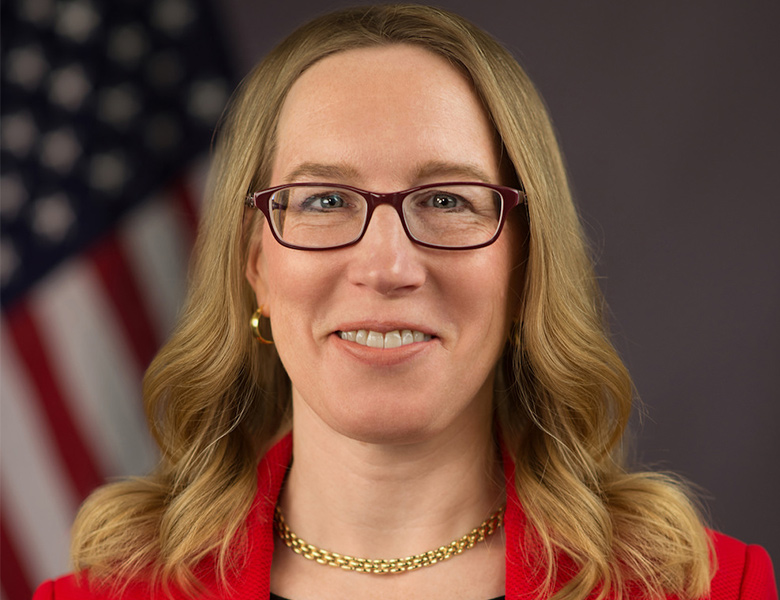 Before Hester M. Peirce was appointed a U.S. Securities and Exchange Commission (SEC) commissioner, she was an undergraduate student at Case Western Reserve University, graduating with a bachelor’s degree in economics in 1993.

Since being sworn into her SEC post in January 2018—one of the federal agency’s four commissioners—Peirce has been an advocate for capital markets and private investment as a driving force for entrepreneurship outside of coastal concentrations.

On Monday, Dec. 9, Peirce will visit campus for a “fireside chat”—the latest in the Edmonds E-Talk Series—discussing startup capital formation, the role of the SEC and entrepreneurship in the Midwest.

The free event—open to all—starts at 5:30 p.m. at the Tinkham Veale University Center and will be followed by a 6:30 p.m. networking reception. Both events are hosted by the CWRU Weatherhead Fund and Harvard Business School Club of Northeastern Ohio. (Free parking for the event is available in the CWRU Campus Center Garage, at 11172 East Blvd.)

Reservations are not required but encouraged.

“Commissioner Peirce’s success shows that with a CWRU education, there’s no limit to how high you can go,” said Ethan Glickstein, a senior finance and economics major from Columbus, Ohio, and president of The Weatherhead Fund and the Class of 2020. “For students preparing to become professionals, this is an opportunity to learn from someone with incredible experience who also wants to help and was in our position not long ago.”

Peirce’s connections to the university don’t end with her undergraduate degree; as the daughter of William Peirce—an emeritus professor of economics at the Weatherhead School of Management, who taught at Case Western Reserve from 1966 to 2001—Hester Peirce grew up in Cleveland and shares her affinity for her hometown and state with audiences around the world.

“We Ohioans, inspired by our state’s heart-like shape, refer to it as ‘the heart of it all,’” Peirce said in an address to the American Chamber of Commerce in Tokyo in August. “Had [Silicon Valley’s entrepreneurs] been born 100 years earlier, [they] would all have been living in Cleveland.”

Before joining the SEC, Peirce researched and taught financial market regulation at George Mason University and served as senior counsel to the U.S. Senate Committee on Banking, Housing, and Urban Affairs and advised its members on securities.

The “fireside chat” will be moderated by Scott Shane, the A. Malachi Mixon III Professor of Entrepreneurial Studies at the Weatherhead School.

“Throughout her career, Commissioner Peirce has been outspoken about the need for entrepreneurial activity outside core centers, such as Silicon Valley and New York,” said Shane, also a professor of economics at the Weatherhead School.

“This topic is important to her, in part, because she grew up in the Midwest—once a great cradle of entrepreneurial activity—but also because she knows the enormous boost to small businesses and the economic ripple effects that are possible when investments are not concentrated in a just few places,” he said.

Peirce’s SEC commissioner post is not her first with the federal agency; she served as counsel to then-SEC Commissioner Paul Atkins from 2004 to 2008 and also worked as a staff attorney in the SEC Division of Investment Management.

Peirce earned a degree from Yale Law School in 1997 and clerked for Judge Roger Andewelt on the U.S. Court of Federal Claims.

“From Siberia Speaks the World: Ethnographic Insights in Times of Change”