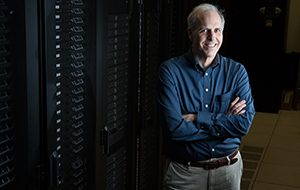 Leading the coordination of the massive, multi-national research effort conducted by the International AMD Genomics Consortium was Case Western Reserve University School of Medicine’s Jonathan L. Haines, whose team also helped guide the complex computational analysis of the data from those study participants with advanced AMD and those without AMD. Their findings appeared in a recent edition of Nature Genetics.

“The enormity and complexity of studying the genetics behind AMD required a large-scale computational analysis study of the disease that could only be performed by bringing together the world’s leading researchers,” said Haines. Haines is the chair of Epidemiology and Biostatics and the Mary W. Sheldon, MD, Professor of Genomic Sciences, as well as the director of the Institute for Computational Biology—a joint venture among Case Western Reserve University, University Hospitals Case Medical Center and Cleveland Clinic.

Using sophisticated computer programs, scientists were able to sort and synthesize more than 12 million genetic variations culled from the study’s more than 33,000 individual participants. Moreover, they applied another dynamic big data science technique—computational pathway analysis—whereby statistically significant variations are grouped together based on the genes they are associated with and the biological pathways those genes affect. Computational pathway analysis reveals how these gene variation groupings may affect biological events leading to AMD.

The combined computational analysis of the entire consortium identified, for the first time, a genetic variant specific to one subtype of AMD. The group identified one genetic variant located near the MMP9 gene region that is implicated only in the particularly damaging wet form of AMD.

AMD comes in dry and wet forms. Both damage vision by destroying cells in the macula, the small center of the retina in the back of the eye. It’s the macula’s job to focus images coming through the eye, which are then converted to electrical signals and sent through the optic nerve to the brain. Localized inflammation in the retina triggers the development of drusen, which are fatty, lipid-rich deposits that accumulate in the eye as a natural part of the aging process. Enough inflammation and drusen accumulation will destroy photoreceptors in the back of the eye that receive the electrical signals from the retina, causing vision loss.

Dry AMD causes loss of cells in the macula and progresses more slowly. The wet form progresses rapidly and causes an abnormal growth of blood vessels within the macula. These blood vessels impair vision by leaking fluid into the eye and are the result of uncontrolled vascular endothelial growth factor (VEGF) spurring development of new blood vessels. The consortium’s big-data solution paid off when they found genetic variations in the region near the MMP9 gene that exclusively affect the wet form of AMD. What MMP9 does is trigger VEGF to produce blood vessel growth in the eye. The finding suggests an explanation for why anti-VEGF therapy is not as effective in many AMD patients whose genetic make-up with the MMP9 gene variation makes them more susceptible to the disease’s progression. MMP9-induced VEGF production might overwhelm the anti-VEGF therapy’s effect.

“Almost every study up until now has only looked at common variations that are pervasive in the population,” said a lead author Jessica N. Cooke Bailey, a post-doctoral fellow in the School of Medicine’s Department of Epidemiology and Biostatics. “Our robust big data techniques allowed us to look for the rare variations that occur, for example, in one in 1,000 individuals. In the genetics world, those really rare genetic variations are important because those significantly increase the risk of a disease such as AMD in individuals who have them.”

Additionally, the consortium’s study located 10 variations pointing to genes involved in maintaining the extracellular matrix within the eye. The matrix is made up of nonliving material among cells that provides structural support in the eye. Seven of these 10 variations affecting the extracellular matrix point to a wet AMD subtype with no early-stage symptoms and with rapid progression.

“The possible connection between AMD and these extracellular matrix genes may allow for predictive genetic tests and more effective therapies for people with this type of AMD,” Cooke Bailey said.

As for future research, next steps will be functional mechanistic studies to determine why and how key gene variations activate to cause AMD.

“More than 10 million Americans are affected by AMD,” Cooke Bailey says. “More than 2 million individuals over the age of 50 have the advanced disease. AMD also adds billions of dollars to health care costs. With more people entering their senior years, the AMD-affected population will only continue to grow, which makes this research particularly crucial.”