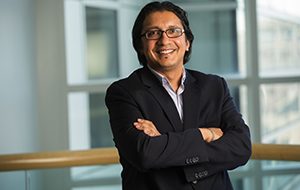 Goutham Narla, an assistant professor of medicine and the Pardee-Gerstacker Professor in Cancer Research, attributes much of his early success and interest in medicine to his undergraduate mentors at Santa Clara University, Professors Eddy Rubin and Kelly Frazer.

An economics major, Narla had trouble landing an internship in finance and opted instead to work in Rubin’s research laboratory. It changed his life.

Despite his inexperience, Narla’s mentors took time to teach him the technical skills required in a lab. They also taught him the value of research, and how rewarding a career as a medical research scientist could be.

Because of that experience, Narla went on to graduate with a double major in economics and biology and enrolled in the Icahn School of Medicine at Mount Sinai in New York City.

Narla has passed along that knowledge and encouragement to the next generation of scientists ever since. Such devotion has earned him a prestigious John S. Diekhoff Award for Mentoring. He will receive the award at commencement on Sunday, May 17.

“I have always been a strong believer that everybody—no matter where they come from, their pedigree (or lack thereof), [or their] experience—should have the chance to experience biomedical research if they are passionate and committed,” Narla said.

In his research lab, Narla is interested in understanding the negative regulators on cancer cell growth. Over the last four years, he’s worked to develop new drugs aimed at slowing the growth of these cancer cells.

“We’re excited by the work we do, and we hope it’ll have a small impact,” Narla said. “The research impact might be far greater if we teach the next generation how to do biomedical research.”

And that is exactly what Narla does.

“Professor Narla motivates his students through respect for their intellect and hard work,” wrote one nominating student. “He fills his lab with students and makes sure they are gaining a well-rounded education and the experience of doing academic research at the highest level.”

Narla’s commitment to mentoring is evident in the Young Scientist Foundation, a non-profit he created to engage high school students in meaningful medical research.

“Through the work of the foundation, I have had the chance to meet some amazingly motivated high school students in the two years that I have spent in the lab,” wrote another student nominator. “I know that these students will have gotten their first taste of scientific research here, and many will go on to pursue scientific careers.”

Narla is known for his personalized approach to mentoring, devoting time to listen to his students to learn about their long-term goals and what they seek from their lab experience.

“Spending the extra 15 minutes in a busy day to talk about an experiment, or about the lab, or career, or the big picture can mean the world to a student at the beginning of their career,” Narla said.

In research presentations, Narla makes a point of noting his students’ contributions in the work. In turn, his students recognize the effort he gives each day to provide opportunities for them to learn and grow as scientists.

“This award is so meaningful because it’s the first time I’ve had this level of acknowledgment,” Narla said. “It’s truly an honor and privilege, not only because it takes into account the whole university, but also because I was nominated by my students.”