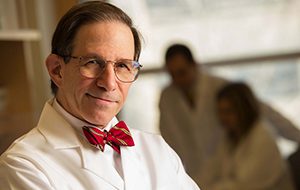 The humble aspirin may have just added another beneficial effect beyond its ability to ameliorate headaches and reduce the risk of heart attacks: lowering colon cancer risk among people with high levels of a specific type of gene.

The extraordinary finding comes from a multi-institutional team that analyzed data and other material from two long-term studies involving nearly 128,000 participants. The researchers found that individuals whose colons have high levels of a specific gene product—that is, the biologic materials expressed by the gene 15-hydroxyprostaglandin dehydrogenase (15-PGDH)—dramatically reduce their chances of developing colorectal cancer by taking aspirin. In contrast, the analgesic provides no benefit to individuals whose colons show low levels of the gene product 15-PGDH. About half of the population possesses high levels of 15-PGDH.

The findings appear in the April 23 edition of Science Translational Medicine. While previous trials and prospective studies had indicated that aspirin could reduce colorectal cancer risk, this retrospective study provides the first evidence to help explain why aspirin benefits some people, but not others.

Funded in part by the Entertainment Industry Foundation’s National Colorectal Cancer Research Alliance (NCCRA), the discovery represents precisely the kind of advancement that Katie Couric and her colleagues sought when they founded the initiative in 2000. She lost her 42-year-old husband, Jay Monahan, to colon cancer in 1998 and has been a steadfast advocate for colon cancer prevention efforts in the years since.

“Prevention, early detection and effective treatments are key to conquering cancer,” Couric said. “This finding that aspirin can prevent colon cancer in certain individuals is an easy and cost-effective addition to our arsenal in the fight against the second-leading cancer killer. I am proud to see this valuable research advancing patient care for those at risk of colon cancer resulting from NCCRA support.”

According to the American Cancer Society, colorectal cancer is the second leading cause of cancer-related deaths in the United States, with predictions that 137,000 Americans will develop the disease and 50,000 will die from it in 2014. Thanks to regular screenings, the death rate from colorectal cancer has dropped in the past 20 years, and members of this research team have been dedicated to finding additional measures to help reduce risk and ultimately eradicate the disease.

In this latest effort, the scientists sought to build on earlier research that indicated that regular use of non-steroidal anti-inflammatory drugs (NSAIDs), including aspirin, reduces the chances of developing colon cancer for some individuals, but not in all. Their question: Why? What is different between those helped by aspirin and those who saw no effects?

Markowitz, also the head of the Cancer Genetics Program at the Case Comprehensive Cancer Center and a medical oncologist at University Hospitals Case Medical Center, joined lead co-senior author Andrew T. Chan of Massachusetts General to explore whether the presence of 15-PGDH led to different outcomes in terms of which individuals developed colon cancer.

Their goal: to see whether it is possible to develop a test that would help guide physicians and patients in determining whether an aspirin regimen would be of benefit.

Previous reports from the Massachusetts General/Dana-Farber team indicated that participants in these studies who regularly took aspirin had a lower risk of colorectal cancer. In earlier research, the Case Western Reserve investigators, along with Monica Bertagnolli of Brigham and Women’s Hospital, found that the presence of 15-PGDH appeared to enhance the ability of celecoxib, an anti-inflammatory medication commonly known as Celebrex, to prevent colon tumors in mice and in 16 humans tested. But when 15-PGDH was low or not present, celecoxib did not prevent colon tumors in mice or humans.

In this latest study, the investigators combined forces in a much larger study to examine whether 15-PGDH levels also might be associated with the colon cancer-preventing benefits of aspirin, which is already taken by many individuals and does not have the cardiovascular side effects of celecoxib. The Massachusetts General and Dana-Farber team dissected normal colon tissue from the pathology specimens of NHS/HPFS participants who developed colon cancer over the studies’ follow-up period.

The team at Case Western Reserve then analyzed these colon tissues to identify which among them had high or low levels of colon 15-PGDH. The investigators at Massachusetts General and Dana-Farber examined how the data on participants’ aspirin use and levels of 15-PGDH related to the risk of colorectal cancer to address the question the larger group had set out to answer: Were individuals who developed colorectal cancer while taking aspirin more likely to have low or high levels of colonic 15-PGDH?

The study is among the first examples of the type of test that could allow more personalized decisions about treatment to prevent colorectal cancer. It also allows those whose 15-PGDH levels indicate aspirin would have little impact to avoid the potential gastrointestinal challenges—such as stomach ulcers—that can accompany aspirin use.

The researchers’ next steps are two-fold: first, the development of a cost-effective and accessible test for measuring 15-PGDH in the colon, and second, a prospective clinical trial to further confirm these findings. Chan and Markowitz both consider the first step well within reach of current medical practice.

“During a colonoscopy, a gastroenterologist could easily and safely take an additional biopsy from the colon in individuals for whom preventive aspirin treatment might be appropriate,” Chan said.

Added Markowitz, “There would be no reason why a good hospital pathology laboratory could not establish the test for 15-PGDH.”

The study authors are also hopeful that publication of these findings will draw the interest from funders and other researchers in developing a confirmatory randomized, prospective clinical trial in which high-risk patients would be identified, treated with aspirin or a placebo, depending on their 15-PGDH levels, and monitored for development of colorectal tumors.

“This study highlights the benefits of the relatively new practice of molecular pathological epidemiology, or MPE,” said co-senior author Ogino of Dana-Farber, an associate professor of pathology at Harvard Medical School. “The molecular pathology part relates to analysis of 15-PGDH gene expression level in normal colon to classify cancer based on molecular pathogenesis, while the epidemiology part relates to collection and analysis of aspirin use data in population. MPE is an integration of these analyses.”

The project was also supported by a Clinical Investigator Award to Chan from the Damon Runyon Cancer Research Foundation and gifts from the Cleveland-based Marguerite Wilson Foundation, the Leonard and Joan Horvitz Foundation, the Richard Horvitz and Erica Hartman-Horvitz Foundation to University Hospitals Case Medical Center, and the Boston-based Bennett Family Fund for Targeted Therapies Research.