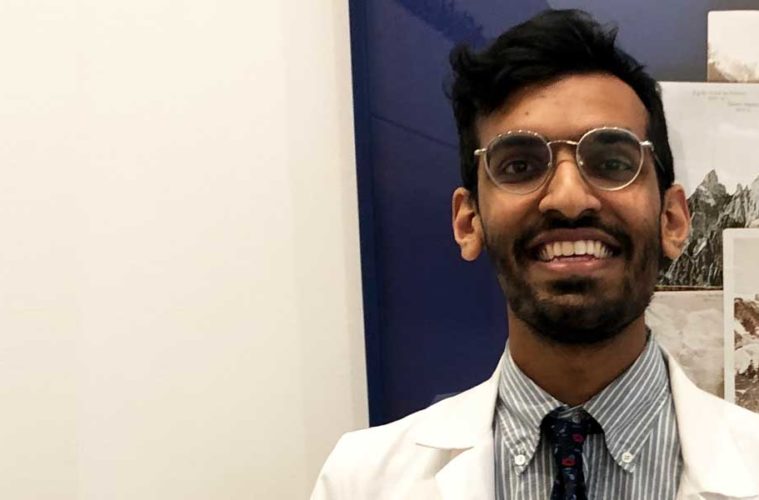 School of Medicine student selected as a 2020 Gates Cambridge Scholar

Nikhil Krishnan describes his educational journey as a mix of math and medicine. After earning a bachelor’s degree in physics from Case Western Reserve University, he went on to pursue a medical degree at the School of Medicine.

“I’ve been fascinated with math since grade school,” he said, “and was also very interested in conducting research that touches peoples’ lives.”

Now, the fourth-year medical student has the chance to merge the fields again—this time as a Gates Cambridge Scholar. Krishnan is the third student in Case Western Reserve history to earn the scholarship.

One of 28 students from the U.S. and a total of 88 globally selected for the prestigious award, Krishnan will study as a PhD candidate in physics at the University of Cambridge beginning this fall, just months after earning his MD from the School of Medicine.

“At CWRU, I frequently cared for patients who have antibiotic-resistant infections,” he explained. “It was my first-hand encounter with this global crisis that inspired me to investigate the possibility of using physics to predict and reverse antibiotic resistance through rationally designed, evolutionarily informed therapies.”

At Cambridge, Krishnan will join the lab of university lecturer Diana Fusco, taking an interdisciplinary approach to understand how evolution acts on short- and long-range cell-to-cell interactions within bacterial biofilms through both simulations and experiments. A renowned researcher, Fusco studies bacterial evolution, isolating basic bacterial mechanisms and removing extra variables. Krishnan will work in her new laboratory, studying the spatial configuration of bacteria and the 3D environment they occupy to develop methods to better eradicate them.

About the Gates Cambridge Scholarship

The prestigious Gates Cambridge Scholar postgraduate scholarship program fully funds each student’s study and research in any subject at the University of Cambridge. The program was established in 2000 through a $210 million donation from the Bill and Melinda Gates Foundation, the largest single donation to a university in the U.K.

In addition to outstanding academic achievement, the program’s selection process places an emphasis on social leadership with the intention of creating a global network of future leaders committed to improving the lives of others.

Since the first class in 2001, more than 1,700 Gates Cambridge Scholars from over 100 countries representing 600-plus universities globally have studied in Cambridge’s 80 academic departments and 31 colleges.