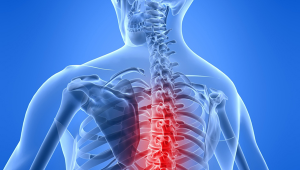 Researchers at Case Western Reserve University School of Medicine recently made a breakthrough that holds promise for the nearly 1.2 million people with upper spinal cord injuries: They bridged a spinal cord injury and biologically regenerated lost nerve connections to the diaphragm, restoring breathing in an adult rodent model of spinal cord injury. The scientists say more testing is necessary but are hopeful their technique will quickly be used in clinical trials.

The work, which restored 80 to more than 100 percent of breathing function, is published in the online issue of the journal Nature July 14.

Restoration of breathing is the top desire of people with upper spinal cord injuries. Respiratory infections, which attack through the ventilators these individuals rely on, are their top killer.

Using a graft from the sciatic nerve, surgeons have been able to restore function to damaged peripheral nerves in the arms or legs for 100 years. But, they’ve had little or no success in using a graft on the spinal cord. Nearly 20 years ago, Silver found that after a spinal injury, a structural component of cartilage, called chondroitin sulfate proteoglycans, was present and involved in the scarring that prevents axons from regenerating and reconnecting. Silver knew that the bacteria Proteus vulgaris produced an enzyme called Chondroitinase ABC, which could break down such structures. In previous testing, he found that the enzyme clips the inhibitory sugary branches of proteoglycans, essentially opening routes for nerves to grow through.

In this study, the researchers used a section of peripheral nerve to bridge a spinal cord injury at the second cervical level, which had paralyzed one-half of the diaphragm. They then injected Chondroitinase ABC. The enzyme opens passageways through scar tissue formed at the insertion site and promotes neuron growth and plasticity. Within the graft, Schwann cells, which provide structural support and protection to peripheral nerves, guide and support the long-distance regeneration of the severed spinal nerves. Nearly 3,000 severed nerves entered the bridge and 400 to 500 nerves grew out the other side, near disconnected motor neurons that control the diaphragm. There, Chondroitinase ABC prevented scarring from blocking continued growth and reinnervation.

“All the nerves hook up with interneurons and somehow unwanted activities are filtered out but signals for breathing come through,” Silver said. “The spinal cord is smart.”

Silver’s lab has already begun preliminary work to restore bladder function—the top request of people who suffer lower spinal cord injuries. He is unsure whether the technique would be useful in restoring something as complicated as walking, but for breathing or holding and expelling urine, he said the tests so far indicate the procedure works well.

How long after injury the nerves are still capable of regeneration and re-connection, he doesn’t know. But, Silver believes that more than the newly injured could potentially benefit from the procedure.