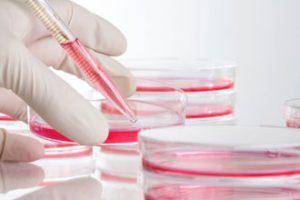 Imagine curing cancer without nausea, hair loss, swelling or any of the other maladies that can accompany chemotherapy or radiation.

This week researchers at Case Western Reserve University School of Medicine took an extraordinary step toward realizing that remarkable vision.

And, as so often happens in the annals of scientific discovery, their breakthrough came almost by accident.

Youwei Zhang and his colleagues stumbled upon the potential cancer killer while studying the basic mechanisms of a particular genome. In the process, they found a mutated form of a gene known as Chk1 which, when activated, proved lethal to cancer cells. Simply stopping the cells from multiplying en masse would have represented an enormous victory in itself. But this mutant gene also knocked off the diseased cells already in existence.

“We have identified a new direction for cancer therapy,” said Zhang, an assistant professor of pharmacology and member of the university’s Case Comprehensive Cancer Center (CCCC). “With this discovery, scientists could stop the proliferation of cancer cells, allowing physicians time to fix cells and genetic errors.”

Zhang and two postdoctoral fellows in pharmacology and at the CCCC, Jingna Wang and Xiangzi Han, published their findings in the Aug. 1 edition of the journal Cancer Research. They started looking at Chk1 because researchers long have been convinced the gene could enhance dramatically the ability of chemotherapy or radiation to help cancer patients. While multiple scientists have pursued this hybrid approach, none have managed to develop a product with the efficacy so many anticipated. In light of these difficulties, Zhang and his team elected to start anew with Chk1 itself. Now that they have realized such success on cells within petri dishes, they want to explore additional ways to activate Chk1 within cancer cells.  One possibility is to use gene therapy to deliver the active mutant form of Chk1 into cancer cells.  The other is to find molecules that can prompt the mutation within Chk1 cells already present.

The research to date received support from the National Cancer Institute.