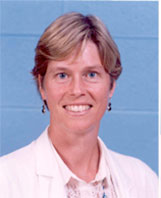 Elizabeth “Lissa” McKinley, founding dean of the Emily Blackwell Society at the School of Medicine, died Saturday after a long and courageous battle with cancer. An assistant professor of medicine and staff physician at MetroHealth Medical Center, she brought a deeply empathetic emphasis on the human side of medicine to the students she mentored, the patients she treated, and the colleagues she inspired.

“Lissa was a storied mentor, beloved by her society and indeed, all the medical students who came in contact with her,” Dean Pamela B. Davis said. “She bore her illness with grace and good humor, and she taught us not only how to live as compassionate physicians, but how to die with grace and dignity.”

McKinley’s colleagues as society deans—Robert Haynie, Lynda Montgomery, Steve Ricanati and Kent Smith—as well as Kathleen Franco, associate dean of student affairs and admissions at the Cleveland Clinic Lerner College of Medicine, together issued this statement about her:

“Lissa’s practice as a clinician and teacher embodied both the science and art of medicine. She knew that physicians work in story, the gathering and the telling. She taught that by telling their stories, they become better healers. She told us about a time when she tended to a suffering patient, performed a procedure to relieve his pain, then minutes later getting a call from her own physician who reported the return of Lissa’s cancer. She laughed and gave thanks for a calling that allowed her to heal her own pain by tending to the needs of her patients and students. When speaking in public, Dr. McKinley preferred to go last so she could tell a story and let the students know, ‘It is going to be okay.’ … Lissa’s example as a humanistic clinician, a caring teacher and a dedicated mentor serve as the legacy that continues to shape the work of medical educators at Case Western Reserve.”

McKinley’s approach to her work, life and illness were so compelling that she was profiled by National Public Radio in 2006, and twice by The Plain Dealer, first in 2010 and again this year. She first was diagnosed with breast cancer in 1996, and lived a decade without any sign of the disease. Then she started to feel pain in her side and one day “rolled over in bed and broke a rib, and I knew—I had metastatic disease.” She began chemotherapy and other treatments and also started a blog, “Saving My Life: One Poem at a Time.”

“I think the whole experience has opened and is opening my eyes in so many ways, and it has raised so many questions for me,” McKinley wrote in January 2008. “These are the things I’d like to talk about in this blog.”

Over the next 100 posts, she shared favorite verses, observations from the hospital while receiving treatment, reminiscences of treasured moments with family and friends, and difficult conversations as her prognosis grew increasingly grim. Themes of gratitude and love permeate every post, along with candid recollections of frustration and exhaustion.

McKinley’s final entry reflects upon her sister Brent’s choice to take time to be with her and her family:

“… when Brent got here she locked some inner key that closed the loop for me and created a safe space amidst the storm … She is there before I need her with the right thing in hand, an expedition when I have had enough and the tiredness and pain are showing… Again, how lucky could I be.”

McKinley’s influence on students and the entire school was so profound that the Blackwell Society was renamed the Blackwell-McKinley Society in her honor.

“She bore her illness with grace and good humor,” Dean Davis said, “and she taught us not only how to live as compassionate physicians, but how to die with grace and dignity.”

She is survived by her husband, Robert “Chip” Gilkeson, a professor of radiology at Case Western Reserve; son, Will; and daughter, Katie.

The Daily will provide information about arrangements as soon as it is available.

Vaccines and epidemics: Lessons from history

“Preparing for Intersections: Improving Presentation Skills and How to Make a Poster”