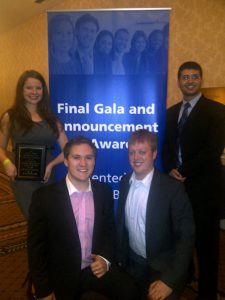 A team of law students from Case Western Reserve University earned recognition as among the best at the 2012 Philip C. Jessup International Law Moot Court Competition.

Although it was the higher seed, Case Western Reserve lost in the first elimination round to the Venezuela national champion, Universidad Monteávila. The Venezuelan national champion has historically been one of the best teams in the competition. Ultimately, a team of law students from Moscow State University beat Columbia University of the United States, winner of the U.S. East Region, for the 2012 world championship.

“With the experience they’ve gained, I have no doubt that these students will go on to be important players in the field of international law,” Scharf said.

Case Western Reserve’s team won the Jessup World Championship in 2008, and in 2011 won the Richard Baxter Award for the Best Applicant Brief in the world. “This year’s Jessup team’s performance has once again put our law school on the world map,” Scharf said. “It’s definitely a factor in our program’s high ranking.”

Based on a survey of U.S. professors who teach international law, U.S. News & World Report recently ranked Case Western Reserve as having the 11th best international law program in the United States.

This year’s Jessup problem involved humanitarian intervention, protection of cultural property during war, and foreign sovereign immunity for war crimes. Now in its 53rd year, the Jessup competition is a simulation of a dispute between countries before the International Court of Justice, the judicial organ of the United Nations. Teams prepare oral and written pleadings, arguing both the applicant and respondent positions of the case. The Chicago-based International Law Students Association organizes the competition.