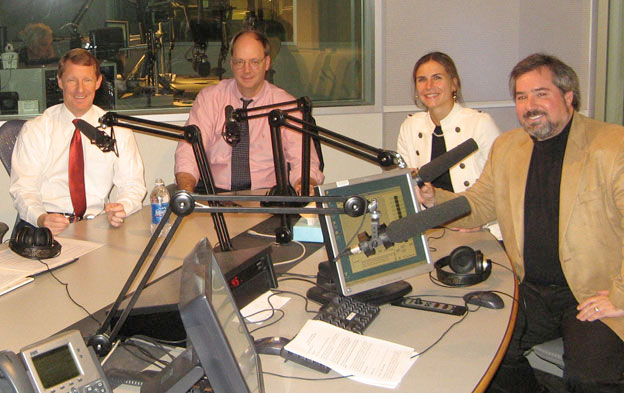 It’s been a few years since his time as a student disc jockey at Duke University, but School of Law Professor Michael Scharf will hit the airwaves again March 1 when his new show, “Talking Foreign Policy,” airs on 90.3 WCPN ideastream.

“We want to cover the most salient and interesting foreign policy topics in each program,” said Scharf, the director of the Frederick K. Cox International Law Center.

The pilot episode, which airs at 8 p.m., covers issues such as predator drones, humanitarian intervention in Syria and responding to Iranian nukes, Scharf said. The program also will be available nationally via podcast and YouTube.

Because international policy issues are so prominent in a day-to-day news cycle but often can be difficult to grasp, Scharf pitched the idea for “Talking Foreign Policy” to 90.3 WCPN ideastream, Cleveland’s NPR affiliate, late last year.

He then lined up a few colleagues known for their ability to discuss complex foreign policy topics in an easy-to-digest manner. Each episode—set to air quarterly—will feature a regular cast of participants, with Scharf serving as host:

The commentators will offer listeners a broad expanse of views, as their political beliefs range across the entire spectrum, Scharf said. In addition, the participants will strive to make the show casual and sometimes humorous, even when discussing serious topics.

Scharf said the show, which he also helps produce, is a fun yet challenging experience. “Hosting is more difficult than I had imagined—keeping the flow of follow-up questions going, spreading them out evenly among the guests, and keeping an eye on the clock,” he said. “There was a steep learning curve, but the folks at WCPN have been very good at mentoring me, and they say I’ve been a very fast learner.”

The second episode of “Talking Foreign Policy” is set to air in April and likely will cover topics such as the targeted killings of Americans abroad and tyrants wanted for international trial.

Scharf, who joined the School of Law in 2002, is the director of the Frederick K. Cox International Law Center and the John Deaver Drinko-Baker & Hostetler Professor of Law.