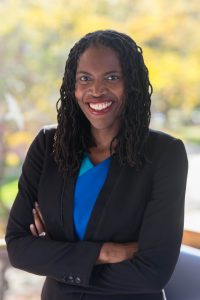 Case Western Reserve University School of Law’s first tenured female African-American professor has been named as the school’s inaugural Associate Dean of Institutional Diversity and Inclusiveness. Ruqaiijah A. Yearby, who joined the faculty four and a half years ago, began her administrative position this month.

“Professor Yearby’s knowledge, experience and commitment to helping others make her uniquely suited to take on this new role,” Deans Jessica Berg and Michael Scharf said. “Case Western Reserve has a long and proud history of commitment to diversity, and we expect to build on that progress with this appointment.”

Yearby has chaired the law school’s Diversity Committee since 2014 and also has participated in several university-wide groups and initiatives related to diversity. The engagement here reflects a trend dating back to her undergraduate days at the University of Michigan, when she founded and led “United Brothers and Sisters,” a student organization dedicating to bringing together students from different cultures, religions and lifestyles through diversity-related programming.

An honors biology major in college, Yearby discovered what would become the focus of her legal scholarship during a National Science Foundation-supported research trip to South Africa two decades ago. As she observed sharp differences in access to health care firsthand, she began to recognize that solutions could not come solely from medical professionals – no matter how well meaning.

“It showed me that there will always be disparities unless the laws and structures of society mandate equality,” she said.

After graduating from Michigan, Yearby went on to earn a Master’s in Public Health from Johns Hopkins University and a Juris Doctorate from Georgetown University. In 2003 she became the first African-American woman hired to a tenure-track position at the Loyola Chicago School of Law; five years later she joined the University of Buffalo as an associate professor in both its law school and its school of public health and health professions.

Berg and Scharf long have emphasized the broad importance of diversity and inclusion, and as deans made improving underrepresented minority enrollment among their leadership priorities. About one-fifth of this year’s entering class comes from underrepresented groups. The school recently transformed two of its restrooms into all-gender restrooms and this year had faculty and staff participate in the university’s Diversity 360 education program. The deans plan to require the program for students as well.

“We know the law school can be doing so much more,” the deans said. “We think this [appointment] will make for a better educational and scholarly climate, enhance admissions recruitment, and provide opportunities to engage more alumni.”