School of Dental Medicine receives up to $4.6 million to reduce cavities in primary care settings 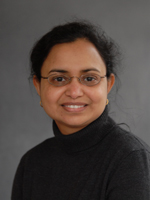 Convincing more parents and caregivers to take young children to the dentist begins with persuasive pediatricians—that’s the belief behind a new Case Western Reserve University research project testing a novel approach to reduce cavities and improve the oral health of low-income children.

Studies show only one in three children from low-income and some ethnic backgrounds visit a dentist in their early years and are more susceptible to oral diseases, including tooth decay. African-American children and Hispanic/Latino children are nearly twice as likely to have untreated tooth decay in baby teeth, according to the National Center for Health Statistics.

“Many parents believe, since baby teeth fall out, there’s no need to take kids to a dentist,” said Suchitra Nelson, a community dentistry professor in the Case Western Reserve School of Dental Medicine. “But cavity-causing bacteria remains even after losing baby teeth and can lead to problems persisting beyond childhood.

“By drawing on the influence of pediatricians, we believe there’s tremendous potential to eventually reduce oral health disparities.”

During routine well-child visits, nearly 90 Northeast Ohio-area pediatricians will apply a fluoride varnish to the teeth of more than 1,500 participating children. They also will deliver core oral-health messages to parents and guardians, including the importance of baby teeth and information on how untreated cavities can lead to problems in the permanent teeth, serious infections and pain, trouble with eating and speaking, loss of time in school and other negative effects.

Pediatricians also will give prescriptions for children to visit local dentists that accept Medicaid, which will cover basic dental expenses.

The study is especially relevant to Northeast Ohio, which has one of the highest rates of untreated cavities among poor and minority children under 6 years old, according to Nelson.

By the project’s end, researchers hope to pinpoint messages that most effectively sway parents and caregivers to take their children to the dentist. They then will translate their findings into a scalable model that could be adopted by pediatricians across the country.

The research grant is one of 10 the NIH recently awarded to research institutions nationally, with the goal of reducing inequalities in access to dental care and improving the oral health of children.

Grant awardees, which include the University of California at San Francisco, Boston University and others, each will try a unique approach but work collaboratively as part of the newly established Multidisciplinary and Collaborative Research Consortium to Reduce Oral Health Disparities in Children, an initiative of the NIH and NIDCR.