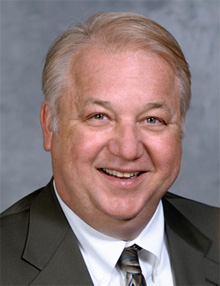 Mark Hans’ interest in treating craniofacial deformities was sparked when his mentor, B. Holly Broadbent, invited him on a shadowing experience at the Craniofacial Clinic at Rainbow Babies and Children’s Hospital. It was 1982, and he’d just joined the faculty at Case Western Reserve University School of Dental Medicine.

More than 30 years later, Hans, professor and chair of the Department of Orthodontics, has taken the knowledge he’s gained researching and treating such deformities at CWRU and Rainbow abroad, as a Fulbright Specialist Award recipient.

The Fulbright Specialist program, created in 2000 to complement the Fulbright Scholar Program, offers top faculty and professionals the opportunity to engage in short-term academic opportunities around the world to support curricular and faculty development.

From mid-November to early December, Hans worked with faculty at the University of Athens in Greece to establish the brand-new Cleft Lip and Palate Center, where he helped:

His project seeks to improve the overall care patients in Greece receive. While Hans noted that there are many talented doctors there, they often work in silos, rarely consulting with each other—so they may not reach the best treatment decisions.

To address that concern, he used the Rainbow team as a model to show doctors in Greece how they can coordinate care. By instituting a protocol that would have all doctors meet with patients at the same time and discuss treatment plans, Hans believes they can reduce the number of operations required.

Hans returned home Dec. 7. Though the grant period will have ended, he will conduct a follow-up visit to check in on the program next fall.

In many ways, Hans followed in his own father’s footsteps. Both became dentists and opened up practices in Berea, Ohio, after earning degrees at Case Western Reserve University.

But for Hans, that wasn’t always part of the plan. He initially studied chemistry at Yale University and intended to pursue a PhD. However, a visit to the CWRU School of Dental Medicine during his senior year of college brought him back to his roots.

“[My father] loved dentistry, and since we lived in Berea, he was part of the fabric of the community,” Hans said. “So I knew about dentists and dentistry all my life.”

While studying dentistry at CWRU, Hans took a dentofacial morphology course with Broadbent, which addressed how orthodontic treatment could positively impact human facial growth and dental development. That course narrowed his area of study to orthodontics.

“I was always interested in the big picture, and orthodontics seemed like an area of dentistry that looked at the whole face and not just the teeth,” he said.

The way the face and teeth change for patients during orthodontic treatment has been a focus of Hans’ research career. He’s launched many longitudinal studies using both two-dimensional X-ray models and, since 2004, cone beam technology to expand to three dimensions.

Hans also has taught a SAGES course titled “Face First” to teach students about roles the face plays in society, such as identity, the concept of facial attractiveness and the social implications of facial deformity.

Given that Hans often sees the same patients from when they’re born through college, he notes that he is often able to help them gain a positive self-image and confidence to be successful.

“Being a craniofacial orthodontist is not just about alignment of teeth, and creating a beautiful smile—it is a life-changing experience for the doctors, the patients and the families,” he said.