School of Dental Medicine Dean Jerold S. Goldberg to step down next year 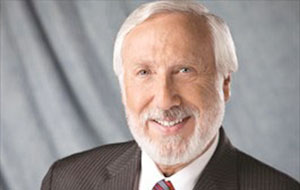 Jerold S. “Jerry” Goldberg announced today that he will step down as dean of Case Western Reserve’s School of Dental Medicine next year, but will continue to work actively on fundraising and related planning activities for the school.

“This place has been a central part of my life since I enrolled here more than four decades ago,” said Goldberg, who will return to the full-time faculty. “I am proud of what we have accomplished together for students, community, and the field at large, and look forward to contributing to our success in new ways.”

Goldberg, a 1970 graduate of the School of Dental Medicine, joined its faculty four years later. He went on to chair its department of oral and maxillofacial surgery for more than a decade, and became interim dean in 1996. His appointment became permanent a year later.

One of the school’s signature advances under Dean Goldberg involved an overhaul of its curriculum. The new model emphasized a “culture of inquiry” that encouraged students to be more active in their learning and seek to expand and extend knowledge throughout their professional careers. As part of that revamp, dental students provide sealants to thousands of Cleveland schoolchildren each year, an initiative that provides dental students early hands-on training and city children significant lessons on improving their oral health. The curriculum revision work proved so groundbreaking that the school received extensive national recognition.

“Our faculty share an extraordinary commitment to improving outcomes in all that they do—teaching, research, outreach and more,” Goldberg said. “Every accomplishment over the past 17 years stems directly from their dedication, collaboration and keen insights regarding what the field needs most.”

In addition to the success of its educational initiatives, the school also witnessed dramatic expansion of its research portfolio. Its research funding has climbed from a couple hundred thousand dollars annually to, in recent years, a few million dollars per annum. The number of principal investigators on major grants has increased from one to a dozen, and the nature of the research has extended to leading-edge studies on AIDS, cancer, preterm birth and health disparities.

“Jerry’s passion for dental medicine and education has helped make Case Western Reserve a national leader in the field,” President Barbara R. Snyder said. “We deeply appreciate his leadership and his commitment to continue to work for the future of the school.”

One of Goldberg’s priorities in recent years has been a 36,000-square-foot expansion of the school’s existing structure. The addition includes substantial new space for research, as well as increased capacity for other academic functions. A key element of the design is to maintain flexibility so that the building can accommodate new uses as academic and technological advances demand. The school also plans to renovate its existing patient clinics, and include a striking new entrance on the corner of Circle Drive and Cornell Road. The project is a major element of the school’s $32 million fundraising effort, part of the university’s Forward Thinking capital campaign.

Dubbed “Dean of the Deans” for his status as the university’s longest-serving school leader, Goldberg also enjoyed a second nickname in 2002-2003: “Double Dean.” During that time he continued as leader of his own school and also served as the interim dean of the School of Medicine. More recently he served as interim provost in 2007-2008, where he guided development of the university’s strategic plan. Since the fall, Provost W.A. “Bud” Baeslack III has been directing development of a new five-year strategic plan, scheduled for completion in June.

“Jerry’s work with the entire campus enabled the Case Western Reserve community to create a clear and compelling vision for its future,” Baeslack said. “We have made significant progress on the goals articulated in that document, and look forward to making even greater gains in the future. Both in his own school and in the university more broadly, Jerry’s impact has been incredible.”

The provost said the university will launch a national search for Goldberg’s successor, with a goal of having a new dean in place by the summer of 2014.