Figures and events in American history, described in unconventional, sharply observed and often humorous detail—imperfections and all—spring alive from the pages and mind of Sarah Vowell and her bestselling narrative nonfiction. Vowell’s writing reveals how American history can turn up unexpectedly in modern culture, often in poignant ways. 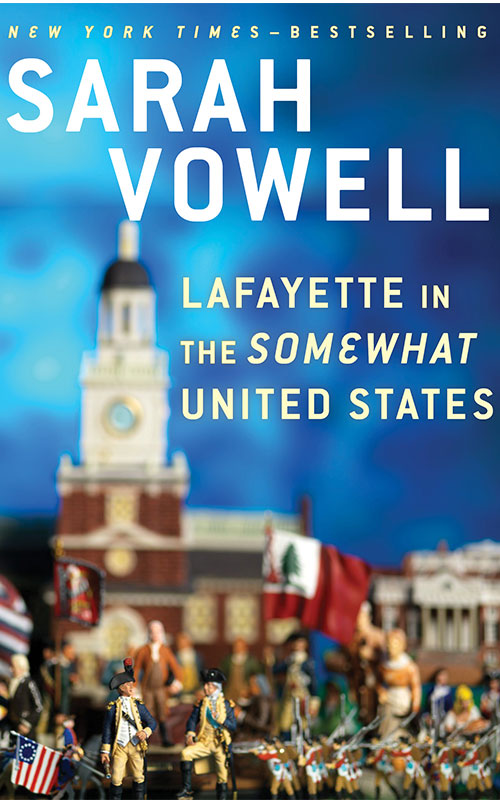 “Vowell’s brand of history categorically refuses to take itself—or any of its subjects—too seriously,” according to Colin Dwyer’s review for National Public Radio. “That’s not to say her subjects aren’t serious….Braving danger, befriending George Washington and taking bullet wounds on behalf of the rebellious colonists, Lafayette earned more than a generalship in the newborn Continental Army. He became America’s ‘best friend’—and, little did he know, fodder for street names and city parks across the U.S.”

And from The Boston Globe: “Expect a different history lesson with Vowell at the helm. In Lafayette in the Somewhat United States, our winking and acerbic guide delves under the seat cushions of the American Revolution, pointing out the paradoxes, follies, and skullduggery behind our nation’s founding….Vowell has a knack for distilling American history down to zingers.”

Vowell and Lafayette were selected as the common reading assignment because “we love the book and the author. Both it and she are super smart and super funny,” said Timothy Beal, the Florence Harkness Professor of Religion, chair of the Department of Religious Studies and also of the common reading selection committee. “Vowell brings a very rare combination of insightful interpretation and sharp humor to her research. She takes a long view of history, telling a story that layers on contemporary perspectives—perspectives that are especially relevant to our current political environment.”

Each year since 2002, the university’s common reading book serves as a basis for programs and discussions for first-year students from orientation through fall semester. Incoming students receive the book to read during the summer.

As part of the common reading program, Vowell will appear on campus as the Elaine G. Hadden Distinguished Visiting Author during fall convocation on Aug. 30—the official opening event of the 2017-18 academic year. The event will be free and open to the public. Ticketing information will be made available this summer.

Vowell visited Case Western Reserve last fall as part of the university’s Think Forum lecture series. She and playwright Tony Kushner took the Milton and Tamar Maltz Performing Arts Center stage together for an entertaining discussion about the life and legacy of Abraham Lincoln.

Vowell, a New York Times’ bestselling author of six nonfiction books on American history and culture, was a contributing editor for the public radio show This American Life from 1996- 2008, and was one of the original contributors to McSweeney’s. She has been a columnist for Salon.com, Time and San Francisco Weekly and continues to write occasional essays for the opinion page of The New York Times.

Vowell has made numerous appearances on the Late Show with David Letterman, Late Night with Conan O’Brien and The Daily Show with Jon Stewart. She is the voice of teen superhero Violet Parr in Brad Bird’s Academy Award-winning The Incredibles, a Pixar Animation Studios film.

Reflecting on what guided her interest in observing and writing about American history and culture, Vowell once said she was inspired listening to Canadian public radio broadcaster and essayist Ian Brown, who struck her as smart, funny and someone who cared about his country—and especially one particular essay arguing for his beloved Quebec to remain Canadian amid a referendum to secede.

“I think hearing that Ian Brown commentary gave me permission to get cracking on my real life’s work—to talk to my country about what my country is like,” she once wrote for the website Transom. “It was my first inkling that patriotism didn’t have to be creepy, that it could be expressed with humor and ambiguity and include all the silly minor details by someone you would actually want to know.”

Vowell will be guest editor for The Best American Nonrequired Reading 2017 (Riverhead, October, 2017).