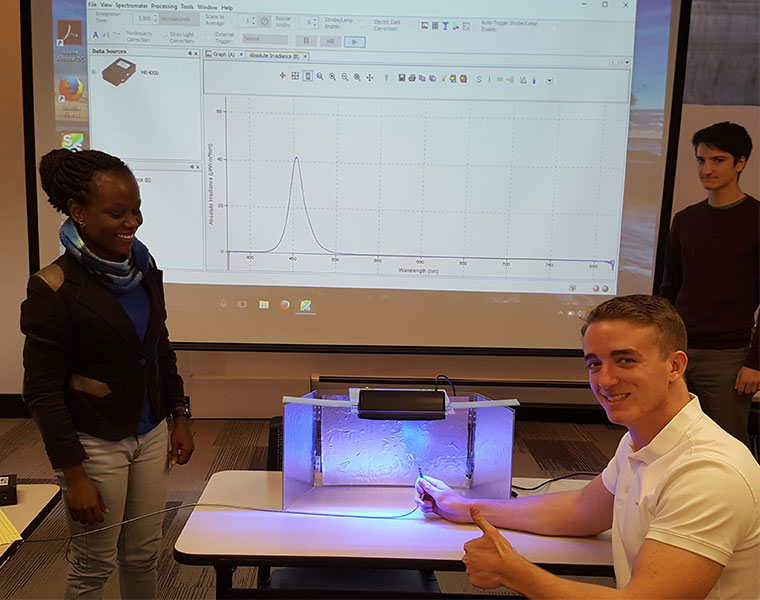 “Engineering Design for the World’s Poorest” is not a theoretical class; the SAGES First Seminar uses hands-on design to solve concerns of the world’s most impoverished communities. This fall, the class examined an issue that a pediatrician in Nigeria had brought to Professor Daniel Lacks’ attention: jaundice treatment in areas without electricity.

Lacks, who teaches the course, is the C. Benson Branch Professor of Chemical Engineering and chair of the Department of Chemical and Biomolecular Engineering. He also directed CWRU’s section of the U.S. Department of State’s Mandela Washington Fellowship for Young African Leaders this summer, which invited the top 1,000 rising young leaders from sub-Saharan Africa to collaborate, network and train at 38 American universities.

The pediatrician, Uche Anene-Nzelu, was one of 25 leaders who came to campus.

While at CWRU for the program, Anene-Nzelu explained to Lacks that jaundice was a major medical issue for many sub-Saharan infants. Jaundice, a liver condition caused by an excess of bilirubin proteins that yellow newborn babies’ skin, is easily treated with one or two days of exposure to blue light, and Anene-Nzelu treats it routinely in her role at Lagos University Teaching Hospital in Nigeria.

Many rural communities, however, are off-grid, making treatments with electricity impossible. If moderate and severe cases of the condition go untreated, they may cause permanent developmental issues.

Before she returned to Nigeria this summer, Anene-Nzelu and Lacks built a crude prototype of a portable, solar-powered phototherapy device. This device became the focus of Lacks’ SAGES first seminar this year, and six groups of students built working prototypes themselves.

He advised his students to consider two criteria in their design: portability and affordability.

The students presented the prototypes they created on Thursday, Dec. 7, with Anene-Nzelu in attendance. The solar-powered prototypes varied widely, including a blanket with a washable cover, box-like structures with adjustable intensity of treatment, a collapsible acrylic enclosure, and a handheld LED panel.

Most of the prototypes were built in the Larry Sears and Sally Zlotnick Sears think[box], CWRU’s facility for innovation and entrepreneurship, where the students learned skills such as building basic circuits, soldering, and laser-cutting parts.

Lacks plans to travel to Nigeria in February with prototypes of the devices they designed.

The power of the project

Lacks is not surprised that his young students—all of whom are under 20 years old—were able to create functioning prototypes. In the six years he has taught the course, he’s seen successful innovation and execution among his students; one team actually designed a pedal-powered charging device that earned $90,000 in grants from the Environmental Protection Agency.

Lacks estimated that about half of the class is engineering majors, but the other half is composed of students pursuing various degrees. Hannah Clarke, a pre-med student studying French, said she isn’t “an engineer by any means,” but that she does “care about solving health problems. … That’s the part that really got me excited about the course.”

Nina Sokol, a biomedical engineering student, said she “wasn’t expecting to actually be making things and doing things that could actually affect the world.”

The collaboration between SAGES, Sears think[box] and Anene-Nzelu is a promising example of a “unique and exceptional learning experience for the students,” said Lacks.

When Lacks travels to Nigeria in February, he will demonstrate the prototypes to medical staff, a step toward international cooperation in solving a serious health care problem.

Even if the prototypes are not implemented, Lacks believes the project was important because of its multidisciplinary nature—and the impact it had on students.

As Clarke realized: “You can’t tackle health care problems in other communities without educating yourself on them.”