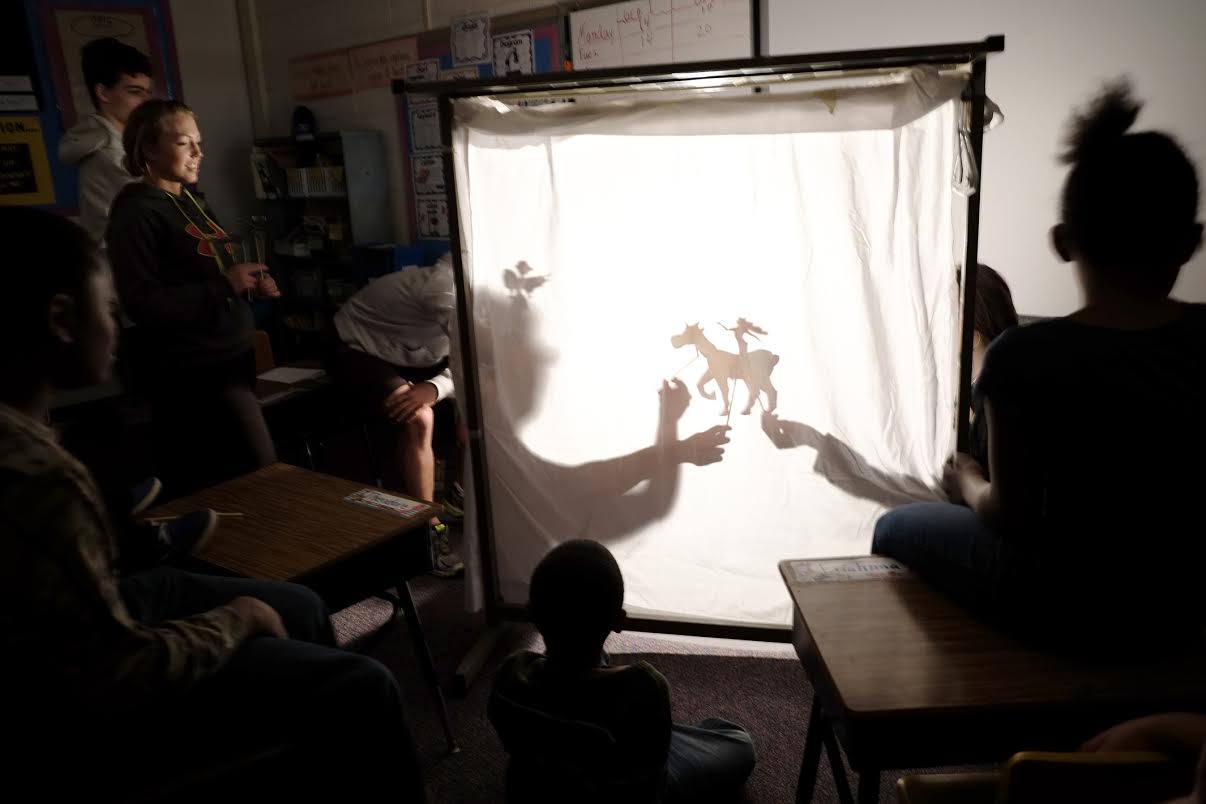 This story could begin in a dark, shadowy place. But it actually occurred in an ordinary school gym with a white sheet and a spotlight.

It was part of an educational experience on merging the arts and sciences of shadows in the SAGES course, “Shadowplay: East and West,” developed by Linda Ehrlich, associate professor of modern languages and literatures.

The fourth through sixth graders in Roxboro’s after-school enrichment program for students, called CHAMPS, stood still as the SAGES students manned the projector’s spotlight. Then the lights went dark.

“Ahhhs” erupted as elementary students “disappeared,” replaced by shadowy figures surrounded by glowing green specks. It was a Halloween-like moment.

Unlike most reticent magicians, first-year SAGES student Matthew Wade, of Gaithersburg, Md., revealed how it worked.

The science team used glow-in-the-dark graffiti paint with particles that react to light around the object to make the space glow—and last long enough to leave an awe-pleasing shadow before fading.

The science experiment had the elementary students lining up to try it themselves.

A few short steps upstairs, the other half of the SAGES students on a class service-learning project demonstrated the art of shadows as they helped the young students make shadow puppets on sticks with movable parts.

Once finished, the older and younger students worked together to improvise some shadow puppet play.

Ehrlich told the students how this art form is popular in India, Indonesia, China and Malaysia. She also showed some video clips of a Javanese puppet (wayang kulit) to give them an idea of what they could create.

Then it was off to a dark office for the arts groups.

Again, props of a sheet and spotlight set the stage for puppets plays. The action began as shadowy figures moved in and out of the light to change size and intensity across the stage and back. Giggles emerged from behind the sheet, adding to the drama in front.

The service-learning project tapped what the SAGES students had learned from Ehrlich and her co-teacher Sebastian Rimehaug, a SAGES writing fellow and cognitive scientist graduate student.

The addition of arts and sciences this year is a new approach for Ehrlich. Others have included collaborations with the Cleveland Museum of Art’s Distance-Learning program. The SAGES students visited the school twice.

“The experience helped us expand what we were studying in class,” she said.

“We spent quite a bit of time brainstorming what we would do with the children,” said Samantha Gallup, a first-year student from Cary, N.C.

The group decided to have children make shadow puppets. The CWRU students made templates, which the children developed from there.

“They were enthusiastic” and used their imaginations to have the characters interact with other puppets in stories they created, said Gallup, a music performance major who enjoys art. “This class is right up my alley as an arts major.”

Wade, an engineering student who never pictured college offering a class such as this one, said he also enjoyed the experience. He was interested in a course with films and found plenty of them in and out of class, from silent, noir and other kinds of movies where shadows were creatively used.

“Shadows are a big part of our visual world,” Rimehaug said, adding that how humans perceive light and shadow helps us navigate the world.