Why does rubbing a balloon on your hair make it stick?

Triboelectric charging causes toner from a photocopier or laser printer to stick to paper, and likely facilitated the formation of planets from space dust and the origin of life on earth.

But the charges can also be destructive, sparking deadly explosions of coal dust in mines and of sugar and flour dust at food-processing plants.

New research led by Case Western Reserve University indicates that tiny holes and cracks in a material—changes in the microstructure—can control how the material becomes electrically charged through friction.

The research is a step toward understanding and, ultimately, managing the charging process for specific uses and to increase safety, the researchers say. The study is published in the journal Physical Review Materials.

“Electrostatic charging can be seen everywhere, but we noticed some cases where materials appeared to charge more—like a balloon rubbed on your head, or packing peanuts sticking to your arm when you reach into a package,” said Dan Lacks, chair of the Department of Chemical and Biomolecular Engineering and one of the study’s lead authors.

“Our idea was that a strain on the materials was causing a higher propensity for the materials to become charged,” Lacks said. “After blowing polystyrene to create the expanded polystyrene that comprises the peanut, the material maintains this distinct charging behavior indefinitely.” 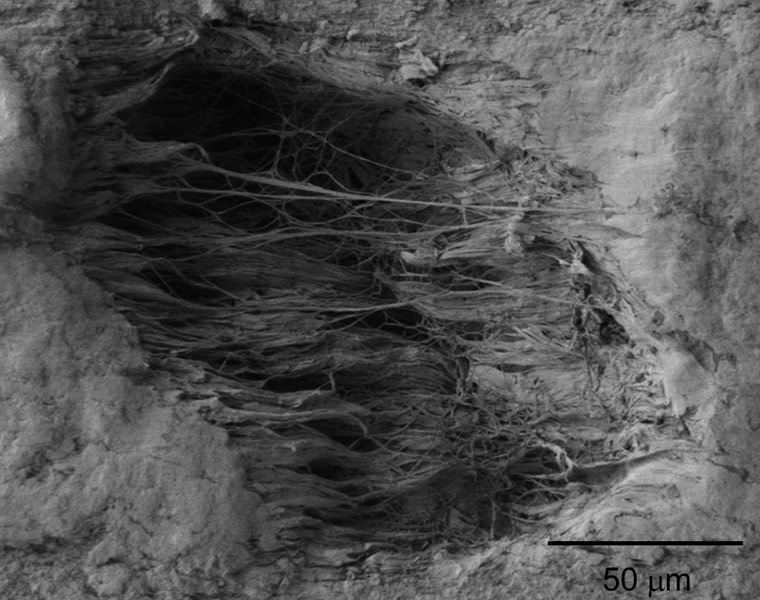 Changes in microstructure, such as this void and fibrils created by straining a polymer sheet, appear to control how the material charges through friction.

Scientists have long known that rubbing two materials, such as a balloon on hair, causes electrostatic charging. To test the theory that strain affects charging, the researchers stretched a film of polytetrafluoroethlyne (PTFE) and rubbed it against a film of unstrained PTFE.

“Triboelectric charging experiments are generally known for their—as some would say—charmingly inconsistent results,” said Andrew Wang, a Case Western Reserve PhD student and co-author who led the work. “What was surprising to me, initially, was the consistency of the unstrained versus strained charging results.”

Lacks, Wang and Mohan Sankaran, professor of chemical engineering and the other lead author of the study, repeatedly found a systematic charge transfer in one direction, as if the materials were made of two different chemical compositions.

After rubbing, unstrained films clearly tended to carry a negative charge and the strained film a positive charge. The finding was not consistent 100 percent of the time, but statistically significant.

Collaborators at Bilkent University, in Ankara, Turkey, used X-ray diffraction and Raman spectroscopy to analyze samples of strained and unstrained films and found at the atomic level, they looked nearly the same.

The only detectable difference in the strained film from the unstrained film was the presence of voids in the material—holes and fractures created by stretching, which changed the microstructure. Some holes and fractures were detected with the naked eye, while others were so small they required the aid of a scanning electron microscope.

The researchers created molecular simulations of strained materials on a computer, which showed the birth of the voids but no other significant changes. That further indicated the change in microstructure is the likely cause of the systematic charge transfer.

“We think the void regions and the fibrils we see around them when we strain the polymer have different bonding and thus charge differently,” Lacks said.

Although the experiment focused on one material, strain may affect all materials, Sankaran said. “The strain we put on the PTFE was large because we were looking for big effects,” he said. “All materials may have a little strain from processing.”

The researchers are now focusing on granular materials as well as other polymers, including polystyrene peanuts and plastic bags.

They hope to understand the scientific basis of triboelectric charging and then control the process. The goal: to prevent damage and explosions or exploit the charging for beneficial uses, such as charged agricultural pesticides that stick better to plants, or paints for cars or even spray tans. Better adhesion would reduce the amounts applied and wasted.

Beyond earthly uses, Wang said, these applications and mitigation strategies might be more pertinent in the coming years as manned and unmanned space missions deal with moon, Mars and asteroid dust.