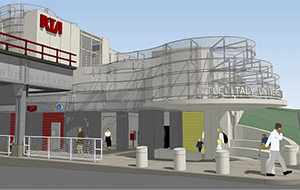 One year after the major renovation of a vital rapid transit station began just south of Case Western Reserve University’s campus, another station to the east is poised for a transformation.

Local officials will join university and foundation leaders for the groundbreaking ceremony at Tony Brush Park, at the corner of Mayfield and Random roads, in Little Italy.

The $17.5 million project, expected to take 1 1/2 to two years to complete, will replace an obsolete Red Line rail station at Euclid Avenue and East 120th Street with a new, energy-efficient building several blocks south, at Mayfield Road at East 119th Street near Uptown.

The new Little Italy station, planned by RTA in partnership with Case Western Reserve, University Hospitals, the Cleveland Clinic and the Cleveland Foundation, will serve and help feed activity to the high employment, cultural, educational and medical centers of University Circle and surrounding neighborhoods.

The Red Line, the system’s busiest rapid line, serves 12 percent of its 200,000 riders daily and 48 million annually, according to RTA.

The project is the result of a 2008 study to develop a transit-oriented development plan for the station. Federal funds will pay for 80 percent of the work. The design includes:

The start of construction on the new station follows by about a year the launch of a two-year, $18.5 million renovation of the Cedar-University Rapid Station at the south end of campus.

“It certainly gives a larger portion of our faculty, staff and students another very convenient and secure option for accessing the RTA transit system,” said Dick Jamieson, vice president of campus services. “It gives us two easily accessible, major transit stations to serve the greater campus area and can be easily linked to our own shuttle system, which is another positive aspect.”