Ross Duffin, musicologist whose influence can be heard around the world, awarded Distinguished University Professorship

Hearing a note or chord played perfectly in tune still has the power to send shivers through Ross W. Duffin.

“It’s transcendent,” said Duffin, the Fynette H. Kulas Professor of Music, “precisely because it is such a rare achievement.”

Duffin’s life in music could be defined the same way. 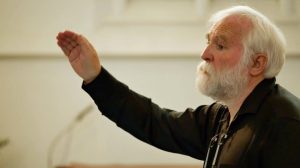 As one of the world’s elite authorities in historical performance practice—how music from earlier centuries was performed—Duffin has re-discovered and revived music rarely or never before heard in modern times. He’s also advocated for its performance on historical instruments, a once-obscure notion now celebrated by a thriving international community of artists, audiences and scholars.

“Even beautiful music can lose something when taken out of its original context,” Duffin said. “Performing it this way can get us closer to its essence, beauty and meaning.”

Duffin will be honored as one of four new Distinguished University Professors during fall convocation Wednesday, Aug. 30, at 4:30 p.m. at Severance Hall. 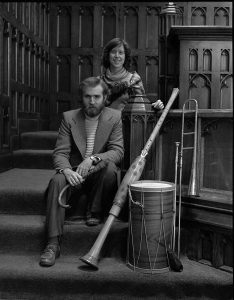 Growing up in London, Ontario, Duffin first kindled his passion for music singing in the church choir directed by his mother, a native of England. The nearby Stratford Shakespeare Festival allowed him to see nearly all of the Bard’s plays on the stage by the time he graduated high school.

After receiving his doctorate from Stanford University in 1977 and coming to Case Western Reserve the following year, Duffin has mentored generations of students, many of whom have gone on to international acclaim in music scholarship and performance. Among them: violinist Julie Andrijeski, considered a national leader in historical performance.

“Ross has helped countless people see that music is a journey of discovery, with still so much to be uncovered,” said Andrijeski, a senior instructor at the university.

“It may be old music, but it’s a living tradition whose modern strength owes so much to Ross.”

Starting in the early 1980s, Duffin introduced early music to millions of people as host and producer of Micrologus, syndicated for 18 years by National Public Radio. (The Kelvin Smith Library recently digitized the series, which Duffin hopes to soon make available via podcast.)

His knowledge of music is so broad and deep that his serendipitous notice of an obscure reference in the text of The Winter’s Tale led to a book—2004’s Shakespeare’s Songbook—that has fundamentally changed how some of the Renaissance playwright’s catalogue is now performed.

His other books include A Performer’s Guide to Medieval Music and 2006’s How Equal Temperament Ruined Harmony (And Why You Should Care), which has profoundly affected music-making around the world.

Founder and artistic director of the decade-old Quire Cleveland, Duffin has also sung in the chamber chorus of Apollo’s Fire, considered one of the country’s premiere Baroque orchestras, since its founding 25 years ago. 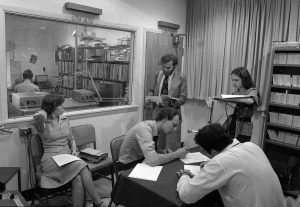 Duffin working on Micrologus at WCLV, 1981

Along the way, Duffin has put his kindness into action. He and his wife, Beverly Simmons, open their home to traveling musicians, and their gatherings and hospitality have fed its reputation as an artistic hub in Cleveland.

Around campus, Duffin is known for his frequent attendance at faculty and guest lectures—earning his colleagues’ admiration for a curiosity that does not discriminate depending on the discipline.

“Beautiful music and art need champions,” said David Rothenberg, an associate professor and chair of the Department of Music. “There is perhaps no one better in this regard than Ross Duffin.”