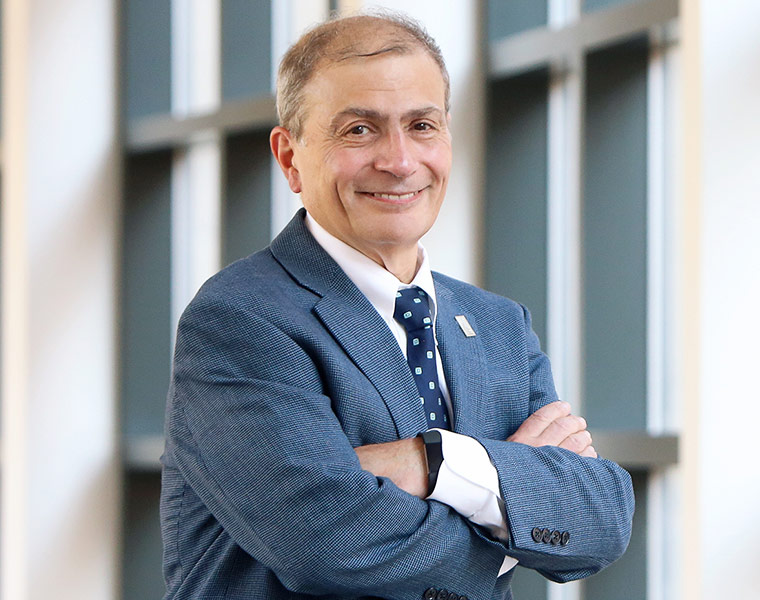 Antibiotic resistance, which develops when harmful bacteria and other damaging microorganisms become resistant to the antibiotics that once killed them, threatens to undo many of the powerful health gains achieved by the use of antibiotics. The problem arises from overuse and misuse of antibiotics in humans and livestock and is recognized by the World Health Organization as a chief challenge to global health.

According to the United States Centers for Disease Control and Prevention (CDC), a minimum of two million people nationwide become infected with antibiotic-resistant bacteria every year and more than 23,000 die. In addition to the biomedical havoc that it wreaks, antibiotic resistance adds as much as $20 billion per year in direct health care costs nationally, according to the CDC.

Robert Bonomo, professor of medicine, pharmacology, molecular biology and microbiology at the School of Medicine, has dedicated his research career to addressing this mounting problem.

For his pioneering investigations in this area, strong teaching and mentoring activities, and commitment to the Cleveland area in his role as chief of the medical service at the Louis Stokes Cleveland VA Medical Center, Bonomo will be formally named one of three new Distinguished University Professors at fall convocation today (Aug. 28) at Severance Hall.

“This is an enormous honor and one for which I am very grateful,” he said. “I love the CWRU community, and this recognition is a high point of my professional life.”

Among his investigations, Bonomo works to uncover the genetic and amino acid determinants  of bacterial enzymes that create multi-resistance to such widely used antibiotics as penicillins and cephalosporins. Nailing down these sequences and using an integrated approach can lead to new medications that overcome the antibiotic resistance.

And his work is paying off. Because of his collaboration with colleagues at CWRU and elsewhere, five new antimicrobials have been approved to date.

“We’re always trying to stay a step ahead of the bacteria,” he said. “Evolution rewards organisms that adapt to their environments, including those that fend off antibiotics, so there is a fundamental natural mechanism that we have to overcome.”

Bonomo said his teaching and mentoring are as meaningful to him as his research.

“Providing intellectual prep for the next generation helps ensure that future patients live longer, healthier lives,” he said. “Nothing can be more crucial than that.”

One of the recipients of the School of Medicine’s inaugural Master Teacher award in 2009, he has trained and mentored students and fellows who have gone on to achieve singular distinction throughout health care.

Widely recognized for his accomplishments, Bonomo has served on numerous national and Case Western Reserve and medical school committees, aided the World Health Organization in developing its influential document on antimicrobial resistance and testified before the U.S. Congress on this burgeoning problem. And he was included on the list of the most cited world scientists (top 1%) for 2018 by Clarivate, according to Reuters.

“Robert Bonomo is the epitome of the Distinguished University Professor,” said Pamela Davis, dean of the School of Medicine and senior vice president for medical affairs at Case Western Reserve. “His sterling research credentials have been widely recognized by his peers. Equally important, he has long been a highly regarded force in the education programs we offer.”