Case Western Reserve University’s newest residence hall will bear the name of one of its most prominent graduates and political trailblazers, the late Congresswoman Stephanie Tubbs Jones.

On Tuesday, the university’s Board of Trustees approved the designation of the Stephanie Tubbs Jones Residence Hall, citing Tubbs Jones’ significant impact on Case Western Reserve as well as her pioneering achievements in public service. The idea for the name came from the student group #webelonghere during a spring meeting with university leaders. The suggestion went through a multi-layered review process during this summer, then came to the board for action.

“I want to thank the #webelonghere members for making such a wonderful suggestion,” President Barbara R. Snyder said. “Throughout all of her extraordinary achievements, Stephanie stayed involved with her alma mater and our students. We are proud to honor her legacy in this way on our campus, and in Greater Cleveland as well.”

Built to accommodate housing needs of the increasing undergraduate student body, the roughly 120,000-square-foot building opened in the fall of 2015. Known for many months as simply “the new residence hall,” it later took the title “The Apartments at 1576”—a nod to its address on E. 115th Street.

As members of the #webelonghere group looked at ways to advance diversity on campus, they saw the new residence hall as an opportunity to highlight Tubbs Jones, an African-American alumna.

“In the spirit of continuing a tradition of transformational black student leadership at CWRU, we have often looked to the life and legacy of Stephanie Tubbs Jones as a source of guidance and inspiration. We are thrilled that the Stephanie Tubbs Jones Residence Hall will celebrate her legacy and be a place that students call home,” said Makela Hayford, president of the African American Society, in a statement made on behalf of the #webelonghere Movement. “Furthermore, as a collective of underrepresented students, we are proud to have received the unanimous support of the Board of Trustees in our efforts to recognize the contributions of such an important black woman leader from our community.” 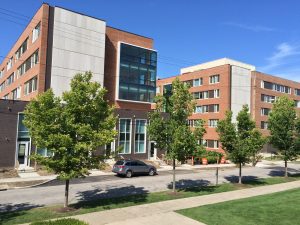 The formal naming ceremony will take place during this year’s homecoming celebration, Oct. 13-16, and members of #webelonghere have offered to help with planning for the event. Watch The Daily for more details later this fall.

A Cleveland native, Tubbs Jones earned her undergraduate and law degrees from Case Western Reserve, where she was a founder of the Afro-American Society (now the African American Society) and an active member of the Black Students Law Association. While in law school, Tubbs Jones served in the role now known as resident assistant, providing guidance and support for undergraduates living in one of the university’s buildings on campus.

While in the House of Representatives, Tubbs Jones advocated to increase health care coverage for low- and middle-income individuals, to protect retirement plans, and to stem predatory lending practices. She also was a passionate advocate for education, protecting children and voting rights. She co-chaired her party’s platform committee in 2004, later co-chaired the Democratic National Committee and, in 2007, became co-chair of Hillary Clinton’s first campaign for U.S. President.

Even with her increasing national activities, Tubbs Jones maintained close ties to the university. Her home was immediately north of the campus, and she regularly appeared at events including the annual Gospelfest during homecoming. Tubbs Jones also spoke at Barbara R. Snyder’s 2007 installation as president.

Tubbs Jones died in August 2008, after suffering a brain aneurysm. In the years since, the university has honored her legacy by naming events like the university’s annual Gospelfest, Homecoming 5K race and basketball tournament. In 2010, the Division of Student Affairs created an award in her honor that provides scholarship support to underrepresented undergraduate students who have made significant contributions to campus life, scholarship and community service. Prior to her passing, the School of Law launched the Stephanie Tubbs Jones Summer Legal Academy for area high school students.