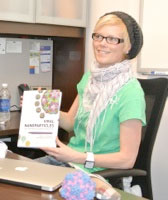 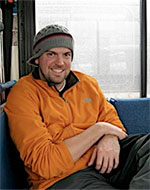 Building precisely defined structures on the nanoscale has proven a challenge for chemists. To provide control and precision, the researchers propose to build complex polymer nanostructures on scaffolds made of plant viruses, tiny organisms that infect plant cells but are benign outside the plant.

Typically, scientists build nanopolymers from small polymer chains that self-assemble and are used to make films, supercrystals and drug delivery devices. But there are always imperfections in the assembly.

“By using a template—the virus—we can produce an evenly dispersed polymer coating that yields more consistent and efficient properties,” Pokorski said. “And this is very modular; it can be applied to lots of uses.”

By controlling the size and surface features, they hope to reduce or eliminate the toxic side effects that can be caused by those two properties during drug delivery, he said.

Steinmetz, an appointee of the Case Western Reserve School of Medicine, will build the templates using tobacco mosaic virus. Instead of making spheres, the goal is to make materials that are considerably longer than they are wide, called “high-aspect” materials.

“The physical property makes them more useful for nanowires and electronics and applications in the body,” she said.

The tobacco virus particles are about 300 nanometers by 18 nanometers, but Steinmetz will control sizes using genetic engineering, “which gives us more control than we could have using purely chemical production methods,” she said.

In addition to using nanoparticles as vehicles to carry medicines to specific targets, they could be used as electrical connectors, replacing carbon nanotubes used to link nanoelectronics.

Pokorski did his foundational work for the grant in the Center for Layered Polymeric Systems in the Case School of Engineering; Steinmetz at the Case Center for Imaging Research.