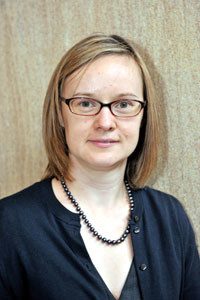 A team led by researchers at Case Western Reserve University’s School of Medicine has identified a promising new target for the development of treatments for chronic pain and some cancers.

The potential of this protein, Transient Receptor Potential Vanilloid subtype 2 (TRPV2), emerged from two studies designed and led by Vera Moiseenkova-Bell, an assistant professor of pharmacology at Case Western Reserve. In the most recent project, scientists from Case Western Reserve and the University of California at Los Angeles detailed TRPV2’s full-length structure. Those results appeared this spring in Nature Communications, just three months after Moiseenkova-Bell and her team published findings regarding TRPV2’s molecular mechanism.

Moiseenkova-Bell’s lab is the first to model the structure of TRPV2 in its entirety. In addition, the group used neuronal cells to reveal the previously uncharacterized molecular mechanism of TRPV2 function in the process of neurite growth.

“By combining our findings regarding both this protein’s structure and molecular mechanism, we can investigate it with a more holistic understanding,” Moiseenkova-Bell explained. “This positions us to develop pharmaceutical compounds that target TRPV2 as treatment for chronic pain.”

Unlike acute pain, which typically signals possible injury and can be alleviated with treatment, chronic pain usually represents a condition that can persist for months or years. Chronic pain can stem from a range of causes, and is often difficult to diagnose.

Moiseenkova-Bell and her colleagues have found that TRPV2 is involved in outgrowth of sensory neurons under a neurotrophin-regulated signaling cascade. The release of neurotrophins—proteins that stimulate and regulate nerve cells—in response to spinal injury leads to inflammatory signaling and aberrant outgrowth in peripheral sensory neurons. As a result of these outgrowths, the individual affected can experience potentially crippling chronic pain. By understanding the molecular mechanism and structure of proteins like TRPV2, scientists may be able to develop new therapeutic treatments for chronic pain.

“TRPV2 is expressed everywhere in the body, and has been shown to be involved in malignancy in neuroblastomas, prostate cancer and bladder cancer,” Moiseenkova-Bell explained. “If we can study this protein in cancer cell lines, we could discover how it behaves and, in the long term, we may have more options to choose from when designing pharmaceutical compounds to treat these conditions.”

Two additional co-authors, Jiansen Jiang and Z. Hong Zhou, are from the University of California at Los Angeles (UCLA).