Parts of the moon’s interior contains as much water as the upper mantle of the Earth – 100 times more of the precious liquid than measured before – research from Case Western Reserve University, Carnegie Institution for Science and Brown University shows. 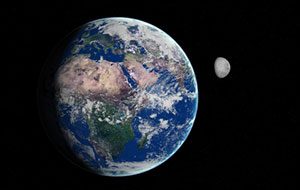 The discovery, published in the May 26 Science Express, challenges assumptions of how the moon formed and the origin of frozen water at the lunar poles.

“These samples provide the best window we have to the amount of water in the interior of the Moon,” says James Van Orman, professor of geological sciences at Case Western Reserve and an author of the paper. “The interior seems to be pretty similar to the interior of the Earth, from what we know about water abundance.”

In fact, the researchers found the concentrations of water and volatile elements including fluorine, chlorine and sulfur in lunar magma are nearly identical to concentrations in solidified magma from primitive terrestrial mid-ocean ridges on Earth.

The discovery strengthens the theory that the moon and Earth have a common origin but forces scientists to reconsider the current theory of the process: that a huge impact in Earth’s early history ejected material into orbit that became the moon.

Part of the origin theory says that water and other volatile elements and compounds were depleted due to the heat and violence of the impact.

This research indicates otherwise and provides new clues to the process of lunar formation.

“Water plays a critical role in determining the tectonic behavior of planetary surfaces, the melting point of planetary interiors, and the location and eruptive style of planetary volcanoes,” says Erik Hauri, a geochemist with Carnegie’s Department of Terrestrial Magnetism (DTM), and lead author. “We can conceive of no sample type that would be more important to return to Earth than these volcanic glass samples ejected by explosive volcanism, which have been mapped not only on the Moon but throughout the inner solar system.”

The presence of this much water in lunar magma also forces scientists to consider volcanic activity as a possible source of ice found in the shadows of craters at the poles.

The orange-colored beads, which are the size of a period on a page, came from deep inside the moon during volcanic eruptions.

Much of the volatile material from the magma escaped during eruption except what was protected inside crystals, Van Orman explained.

In seven samples, researchers ground and polished their way to the surface of the inclusions then measured the volatile elements that existed prior to eruption. From these measurements, the team was able to estimate the amount of water in the moon’s interior.

Three years ago the same team, in a study led by Saal, reported the first evidence for the presence of water in lunar volcanic glasses and applied magma degassing models to estimate how much water was originally in the magmas before eruption.

“The bottom line,” says Saal, “is that in 2008, we said the primitive water content in the lunar magmas should be similar to lavas coming from the Earth’s depleted upper mantle. Now, we have proven that is indeed the case.”