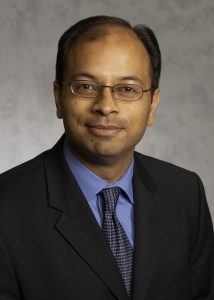 Researchers at Case Western Reserve University School of Medicine have identified a genetic factor that prevents blockages from forming in blood vessels, a discovery that could lead to new therapies for cardiovascular diseases.

The findings are described in the Nov. 19 issue of the Journal of Clinical Investigation.

Researchers led by Mukesh K. Jain, professor of medicine, Ellery Sedgwick Jr. Chair and director of Case Cardiovascular Research Institute at Case Western Reserve School of Medicine, found that a shortage of the genetic factor KLF4, which regulates endothelial cells lining the interior of blood vessels, makes the lining more prone to the buildup of harmful plaque and fat deposits. In addition, they showed that the deficiency of KLF4 also made the blood vessel more susceptible to clot formation. The plaque buildup (called atherosclerosis) narrows vessels and provides the foundation for clot formation (called thrombosis) that leads to heart attack and stroke.

Conversely, sufficient levels of KLF4 protect the inner lining of blood vessels from toxins and other harmful agents that trigger the buildup of plaque and clot formation.

“This research answers a fundamental question in blood vessel health, identifying KLF4 as a master regulator of the most cardinal functions of endothelial cells,” said Jain, who also is chief research officer of Harrington Heart & Vascular Institute at University Hospitals Case Medical Center.

“The fact that the level of these genetic factors can be altered in human disease suggests that targeting them may be a viable therapeutic strategy,” Jain said.

The researchers now are developing tools to identify small molecules that increase KLF4 levels. Long-term, the goal is to identify a new class of molecules to develop a drug that works with those already used to treat heart disease. Another possibility is to modify existing drugs that can boost KLFs levels.

“It is possible,” Jain said, “that chemical modification of the current statins will create super-statins that are more potent at inducing KLF levels, providing additional benefit.”

Studies have shown that the earliest lesions of atherosclerosis typically begin at points where blood vessels branch out to different parts of the body, such as the brain, heart and legs.

Researchers hypothesized that mechanical forces may irritate the lining at these intersections, making them more prone to atherosclerosis than straighter lengths of the vessel system. In addition, toxins and harmful cytokines—cell secretions that can trigger inflammation—can further injure the endothelium and speed the development of disease.

However, the molecular reasons for this have remained elusive until now.

“These anti-adhesive, anti-clotting, and anti-permeable properties of the endothelial surface are vitally important as they enable the smooth transport of blood, oxygen and nutrients to cells throughout the body,” Jain said.

In prior in vitro studies, Jain’s research group identified KLF4 and another genetic factor, KLF2, as agents that promote healthy functioning of the endothelium. Their work also indicated that increased levels of KLF factors allowed endothelial cells to block injury induced by toxins and cytokines.

In the new study, researchers used mouse models to more precisely determine the role KLF4 plays in preventing atherosclerosis and thrombosis, a leading cause of death and disability worldwide.

Over several years, the researchers generated mice that had either high or low levels of KLF4 in the endothelium. The animals were fed a high-fat diet for five to six months to mimic the unhealthy eating habits seen in much of the industrialized world.

The researchers found that, despite the fatty diet, mice with high levels of endothelial KLF4 were protected from developing atherosclerosis and thrombosis. Those lacking KLF4 had higher levels of plaque buildup and disease and were less able to prevent harmful cells from damaging blood vessels.

In addition to Jain and his research group, the study published in the November issue of the Journal of Clinical Investigation involved the collaboration of Stanton L. Gerson, Alvin Schmaier, Anne Hamik and Daniel I. Simon, colleagues at the School of Medicine and University Hospitals Case Medical Center.