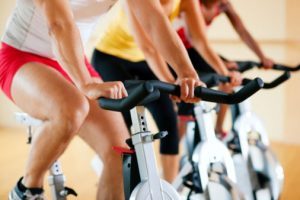 While exercise is accepted universally as the most beneficial prescription physicians can write for patients, little is known about the molecular mechanisms that generate its widespread health benefits. Researchers from Case Western Reserve School of Medicine have shed light on this mystery by discovering that a genetic factor, Kruppel-like Factor 15 (KLF15), governs the body’s ability to burn fat during exercise.

Previous research from the laboratory of Mukesh Jain, MD, FAHA, identified the importance of KLF15 in the metabolism of two of the three basic nutrients used by the human body: sugar and protein. The most recent discovery of the essential role for the gene in the metabolism of the third nutrient, fat, completes the trilogy. Ultimately, research has uncovered that KLF15 drives the ability of our body’s working muscles to increase their capacity to burn fat and generate force.

After screening all 17 members of the Kuppel-like family of genes for changes that correlated with altered metabolism, the investigators found that KLF15 levels dramatically increased in the skeletal muscle of mice during exercise. This observation led Jain, the study’s senior author and professor of medicine, Ellery Sedgwick Jr. Chair and director of the Case Cardiovascular Research Institute at Case Western Reserve School of Medicine as well as the chief research officer at Harrington Heart & Vascular Institute at University Hospitals Case Medical Center, to partner with world-class human physiologists from Deakin University in Australia to study KLF15 levels of healthy human patients before and after aerobic exercise. They found an increase in KLF15 levels in humans during exercise that matched the percentage increase seen in the mouse models, which was two to three times the normal level. Their study is published in the journal Proceedings of the National Academy of Sciences.

“This finding, coupled with the others from our group, puts KLF15 in a very powerful metabolic position. It’s a unique factor at the nexus of the body’s core processes,” said lead author Saptarsi M. Haldar, MD, assistant professor of medicine at Case Western Reserve University School of Medicine and cardiologist at Harrington Heart & Vascular Institute at University Hospitals Case Medical Center.

To clarify why exercise-mediated increases in KLF15 are essential, the team then examined mice deficient in the gene. Strikingly, they found the gene-deficient mice were unable to burn fat efficiently and sustain aerobic exercise. As such, the gene was found to be an essential regulator of muscle’s ability to use fat—the body’s primary source of stored energy.

“Dr. Haldar’s recent observations, coupled with previous work from our group, now place KLF15 as central to nutrient production and utilization in mammals. As coordination of nutrient flux is essential for energy production by all tissues, the findings impact virtually all biological processes and disciplines,” Jain said. “Furthermore, as altered metabolism underlies many disease processes, targeting KLF15 activity may be exploited for therapeutic gain. Indeed, in the current work, Dr. Haldar’s findings in animal models and human subjects suggest that modulating KLF15 function might be a fruitful strategy to potentiate the health benefits of exercise and to treat metabolic and muscle-based diseases.”

Exercise is the first choice of treatment for many metabolic disorders, particularly obesity and diabetes. With the discovery that KLF15 mediates important beneficial effects of exercise, scientists may be able to induce similar effects using medication. In the long run, such therapies could be used as a complement to exercise.

In addition to investigating its value for metabolic disorders, Haldar is leading efforts to determine the role KLF15 plays in Duchenne muscular dystrophy, a currently incurable genetic disease characterized by the progressive weakness and degeneration of skeletal muscles. Research indicates that metabolic abnormalities might be a major contributor to disease progression in this lethal condition, which is usually fatal by the age of 30. The team is actively exploring KLF15’s role in patients afflicted with this devastating condition.