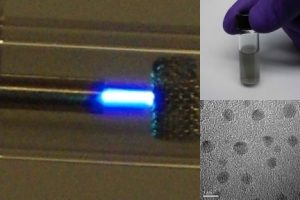 Instead of having to use tons of crushing force and volcanic heat to forge diamonds, researchers at Case Western Reserve University have developed a way to cheaply make nanodiamonds on a lab bench at atmospheric pressure and near room temperature.

The nanodiamonds are formed directly from a gas and require no surface to grow on.

The discovery holds promise for many uses in technology and industry, such as coating plastics with ultrafine diamond powder and making flexible electronics, implants, drug-delivery devices and more products that take advantage of diamond’s exceptional properties.

Their groundbreaking investigation is published in the scientific journal Nature Communications. The findings build on a tradition of diamond research at Case Western Reserve.

Beyond its applications, the discovery may offer some insight into our universe: an explanation of how nanodiamonds seen in space and found in meteorites may be formed.

“This is not a complex process: ethanol vapor at room temperature and pressure is converted to diamond,” said Mohan Sankaran, associate professor of chemical engineering at Case Western Reserve and leader of the project. “We flow the gas through a plasma, add hydrogen and out come diamond nanoparticles. We can put this together and make them in almost any lab.”

The process for making these small “forever stones” won’t melt plastic so it is well-suited for certain high-tech applications. Diamond, renowned for being hard, has excellent optical properties and the highest velocity of sound and thermal conductivity of any material.

Unlike the other form of carbon (graphite), diamond is a semiconductor, similar to silicon, which is the dominant material in the electronics industry, and gallium arsenide, which is used in lasers and other optical devices.

While the process is simple, finding the right concentrations and flows—what the researchers call the “sweet spot”—took time.

Sankaran and John Angus, professor emeritus of chemical engineering, came up with the idea of growing nanodiamonds with no heat or pressure about eight years ago.  Angus’ research in the 1960s and 1970s led him and others to devise a way to grow diamond films at low pressure and high temperature, a process known as chemical vapor deposition that is now used to make coatings on computer disks and razor blades. Sankaran’s specialty, meanwhile, is making nanoparticles using cool microplasmas.

It usually requires high pressures and high temperatures to convert graphite to diamond or a combination of hydrogen gas and a heated substrate to grow diamond rather than graphite.

“But at the nanoscale, surface energy makes diamond more stable than graphite,” Sankaran explained. “We thought if we could nucleate carbon clusters in the gas phase that were less than 5 nanometers, they would be diamond instead of graphite even at normal pressure and temperature.”

After several ups and downs with the effort, the process came together when Kumar joined Sankaran’s lab. The engineers produced diamond much like they’d produce carbon soot.

They first created a plasma, which is a state of matter similar to a gas but a portion is becoming charged, or ionized. A spark is an example of a plasma, but it’s hot and uncontrollable.

To get to cooler and safer temperatures, they ionized argon gas as it was pumped out of a tube a hair-width in diameter, creating a microplasma. They pumped ethanol—the source of carbon—through the microplasma, where, similar to burning a fuel, carbon breaks free from other molecules in the gas, and yields particles of 2 to 3 nanometers, small enough that they turn into diamond.

In less than a microsecond, they add hydrogen. The element removes carbon that hasn’t turned to diamond while simultaneously stabilizing the diamond particle surface.

The diamond formed is not the large perfect crystals used to make jewelry, but is a powder of diamond particles. Sankaran and Kumar are now consistently making high-quality diamonds averaging 2 nanometers in diameter.

The researchers spent about a year of testing to verify they were producing diamonds and that the process could be replicated, Kumar said. The team did different tests and brought in Yap’s lab to analyze the nanoparticles by Raman spectroscopy.

Currently, nanodiamonds are made by detonating an explosive in a reactor vessel to provide heat and pressure. The diamond particles must then be removed and purified from contaminating elements massed around them. The process is quick and cheap but the nanodiamonds aggregate and are of varying size and purity.

The new research offers promising implications. Nanodiamonds, for instance, are being tested to carry drugs to tumors. Because diamond is not recognized as an invader by the immune system, it does not evoke resistance– the main reason chemotherapy fails.

Sankaran said his nanodiamonds might offer an alternative to diamonds made by detonation methods because they are purer and smaller.

The group’s process produces three kinds of diamonds: about half are cubic, the same structure as gem diamonds, a small percentage are a form suspected of having hydrogen trapped inside and about half are lonsdaleite, a hexagonal form found in interstellar dust but rarely found on Earth.

A recent paper in the journal Physical Review Letters suggests that when interstellar dust collides, such high pressure is involved that the graphitic carbon turns into londsdaleite nanodiamonds.

Sankaran and Kumar contend that an alternative with no high-pressure requirement, such as their method, should be considered, too.

“Maybe we’re making diamond in the way diamond is sometimes made in outer space,” Sankaran proposed. “Ethanol and plasmas exist in outer space, and our nanodiamonds are similar in size and structure to those found in space.”

The group is now investigating whether it can fine-tune the process to control which form of diamond is made, analyzing the structures and determining if each has different properties. Lonsdaleite, for instance, is harder than cubic diamond.

The researchers have made a kind of nanodiamond spray paint. “We can do this in a single step, by spraying the nanodiamonds as they are produced out of the plasma and purified with hydrogen, to coat a surface,” Kumar said.

And they are working on scaling up the process for industrial use.

“Will they be able to scale up? That’s always a crap shoot,” Angus said. “But I think it can be done, and at very high rates and cheaply. Ultimately, it may take some years to get there, but there is no theoretical reason it can’t be done.”

If the scaled-up process is as simple and cheap as the lab process, industry will find many applications for the product, Sankaran said.