Researchers create vest that would detect cancers before symptoms arise 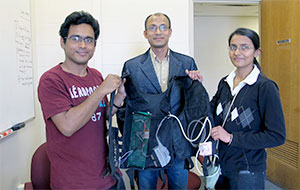 A group of researchers from Case Western Reserve University’s Department of Electrical Engineering and Computer Science are lining a vest with ultrasound sensors, signal processing electronics and other high-tech gear. Their goal is to provide a portable and inexpensive means for detecting common cancers much earlier than the typical diagnosis based on symptoms, thereby enabling treatment options to be more effective.

The diagnostic vest is designed for use at home or to be carried into rural areas, particularly in developing countries.

Doctoral candidates Abhishek Basak and Vaishnavi Ranganathan and their adviser Swarup Bhunia, an associate professor of electrical engineering, hope to have a prototype ready by the end of this year.

Their idea won the Student Paper Competition at the Institute of Electrical and Electronics Engineers (IEEE) – Engineering in Medicine and Biology Society’s Special Topic Conference on Point-Of-Care Healthcare Technologies, in Bangalore, India, earlier this year.

“To the best of our knowledge, there is no such portable and affordable screening system for early detection of a tumor in internal organs,” Bhunia said. “With an alarming rise in cancer incidences across the world, such a system can provide effective pathway to battle the killer disease.”

The vest is designed to detect cancers in organs close to the skin surface, such as breasts, ovaries, uteruses, bladders and prostates. These are the locations of approximately half the cancers diagnosed in females and 42 percent of those diagnosed in males last year, according to the American Cancer Society.

The researchers point out that cancer treatments are most effective when done early, yet, at present, less than 20 percent are detected in their initial phase, called stage 1, for most cancers.

“We chose ultrasound because it can be easily miniaturized, functions at acceptable power levels and our tests have shown that it can detect tumors at sub-centimeter dimensions, which corresponds to stage 1 for most cancers,” Abhishek said. “At stage 1, the cancer is most treatable.”

Ultrasound works much like radar. The transducer emits sound waves into the body and receives the waves that bounce back from the organs. The reflected echoes from a tumor are usually different from that of normal tissue.

Each vest will hold as many as five transducers at strategic locations, a portable battery and electronic components that convert the received sound waves into electrical signals that, in turn, create the images and enable diagnosis. Embedded software automatically will detect anomalies in organ tissues and alert the wearer by relaying the information to a smartphone.

Users would be required to wear the vest every two to three months. They would first apply a gel used to improve ultrasound transmission, then slip into the vest and tighten the straps to fit the sensors snugly to the body. Images would be produced in 15 to 30 minutes.

If an anomaly is found, the wearer should schedule a follow-up with a doctor, the researchers say.

The vest would be most useful in developing countries, where access to magnetic resonance imaging or computed tomography scans is difficult or too expensive, Bhunia said. The team doesn’t know what the final cost will be, but is certain it would be a small fraction of the cost of those scanners.

The researchers are collaborating with Hossam Saad, a radiologist at the Department of Veterans Affairs, to build and test the prototype. They also plan to incorporate research advances made by Case Western Reserve researchers who are building flexible sensors, which they believe would make the vest easier to wear, produce better images and increase the likelihood of detecting the disease.