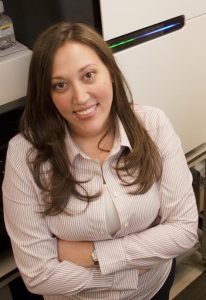 Researchers at Case Western Reserve University have identified a microRNA biomarker that shows promise in predicting treatment response in the most common form of ovarian cancer—a breakthrough that has the potential to improve outcomes for patients with the disease.

A Case Comprehensive Cancer Center research team led by Analisa DiFeo, an assistant professor of general medical science-oncology at the School of Medicine, found that the biomarker miR-181a is a molecular driver of epithelial ovarian cancer (EOC). The research team also found that elevated levels of miR-181a in ovarian tumors are associated with chemotherapy resistance and disease progression.

“By looking at the expression of this microRNA in tumor samples, we get an idea which women may respond to standard chemotherapy and which are at a high risk for recurrence,” DiFeo said. “This helps guide treatment decisions and improve survival rates.”

In the past, researchers have been unable to predict how EOC patients will respond to treatment. This marks the first time scientists have demonstrated that a single miRNA—miR-181a—increases the cellular survival, drug resistance and tumor metastasis of ovarian cancer cells by activating TGF-β, a potent cancer signaling pathway.

“Prognostic markers and early detection markers for ovarian cancer have been elusive,” said Stanton Gerson, the Asa and Patricia Shiverick- Jane Shiverick (Tripp) Professor of Hematological Oncology, director of the Case Comprehensive Cancer Center and Director of the Seidman Cancer Center at UH Case Medical Center. “This study is one of the first to indicate that, it is possible using a novel genomic analysis, to identify abnormalities specific to ovarian cancer. Women worldwide will benefit from this discovery.”

Ninety percent of all women with ovarian cancer have the EOC subtype, which is the most lethal of all female reproductive track malignancies and the fifth-leading cause of cancer deaths in women worldwide. Each year, EOC claims an average of 15,000 lives and physicians diagnose 23,000 new cases. Because EOC is generally asymptomatic, most women are at an advance stage (Stage 3-4) by the time they are diagnosed. Approximately 70-80 percent of patients who survive the disease after the first onset go on to face a recurrence.

DiFeo’s findings, published in the January 7 issue of Nature Communications, provide new insights into the role of miRNAs as treatment biomarkers.  MicroRNA like miR-181a—short, single stranded RNA molecules—fine tune the expression of as much as 60 percent of all protein encoding genes.

Through a collaboration with the Mount Sinai Medical Center in New York and the Mario Negri Institute of Pharmaceutical Research in Milan, Italy, DiFeo’s team screened the expression of miRNAs in both primary and recurrent human ovarian tumors.

“We found that this (miR-181a) was one of the top expressing microRNAs in tumors from patients who recurred within the first six months after treatment,” DiFeo said. “We also found higher levels in recurrent tumors compared to primary tumors in the women we tested.”

A better understanding of the pathway that drives EOC will help researchers find potential therapeutic targets that could block the devastating effects of miR-181a, DiFeo adds. Her team discovered that miR-181a blocks the expression of the Smad7 gene, which generally shuts down the TGF-β signaling pathway, a potent inducer of metastases. When miR-181a blocks SMAD7, TGF-β works unabated and metastases occurs.

DiFeo, who began her research while at Mount Sinai Hospital in New York City, has been at Case Western Reserve since 2012. To determine patient response, her team analyzed 80 human tumor samples and used a combination of in vitro and preclinical ovarian mouse models (human tumor cells injected in a mouse) to access the function and pathway of miR-181a.

“We’re now looking for small molecules that can block the interaction between miR-181a and Smad 7, stop TGF-β activation and prevent this micro-RNA from spreading and disseminating ovarian cancer,” DiFeo said. Until this discovery is made, DiFeo suggests that doctors test for recurrence at more frequent intervals.