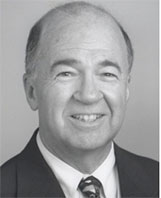 Joseph F. Fagan III, the Leffingwell Professor of Psychology and a leading researcher on infant intelligence, died Aug. 10. He was 71.

Fagan became a full professor in 1978 and received the endowed Leffingwell Professor of Psychology title in 1990. He also served as chair of the Department of Psychological Sciences from 1990 until 1995.

“It was a privilege to work with Joe. He was an outstanding scientist and a wonderful human being with a sense of humor that I always appreciated,” said Cyrus C. Taylor, dean of the College of Arts and Sciences. “I was always particularly impressed with how his former students remember him, recalling with gratitude how he had changed their lives, shaping in profound ways who they had become.”

As a researcher, Fagan is well-known for his work related to infant intelligence. Fagan developed a theory that individuals process information to produce knowledge, and how well that information is processed depends on genetics and biophysical aspects of the environment. His findings led to a valid test of intelligence that measures information-processing abilities of infants—and identifies mental disabilities within the first year of life. The use of this test has led to the discovery of environmental agents that can cause mental disabilities.

In 2009, Fagan received the Mensa Education and Research Foundation Award for Excellence in Research for his study on how an intelligent infant becomes an intelligent, highly achieving adult. He also earned a number of state and federal grants to fund his research and was named a fellow of the American Psychological Society, among other honors.

Throughout his 45 years on the faculty, Fagan was renowned as a scholar, but also as a professor and mentor. One of his primary interests was developing the research skills of others, including teaching a grant-writing course that helped graduate students and faculty members secure millions of dollars in funding, according to Lee Thompson, chair of the Department of Psychological Sciences. In addition, for nearly 15 years, he mentored Cleveland-area minority students in the Bridges to Success in the Sciences program based at Cuyahoga Community College.

“Joe was a pillar supporting all aspects of our department’s mission,” Thompson said. “Everyone went to Joe for guidance and support. The department will not be the same without him.”

Fagan is survived by his wife, Cindy Holland (WRC ’86, GRS ’91, ’92); his children, David and Brian (Suzanne); stepchildren Jesse, Nicholas, Christopher and Michael Knevel; and seven grandchildren. He was preceded in death by his son Michael.