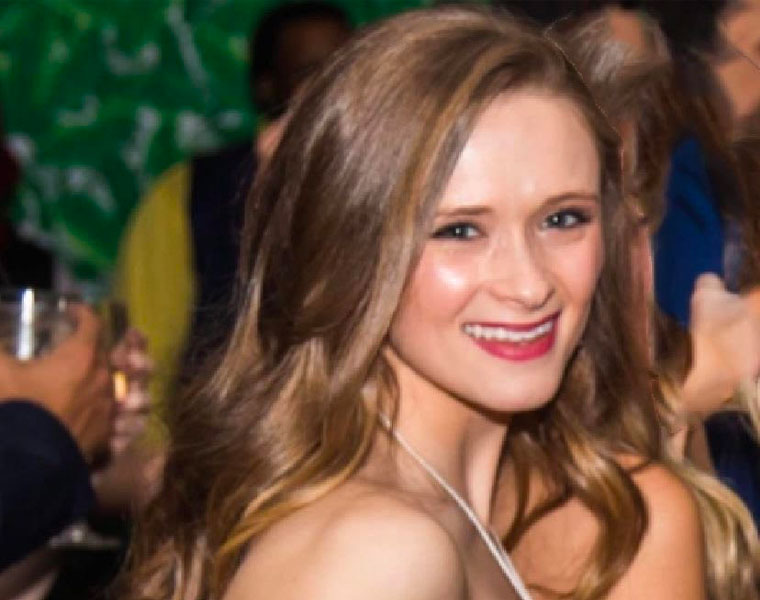 When Katie Nelson turned around to introduce herself to Cara Murthy during dental school orientation in fall 2017, her smile immediately turned Murthy’s first-day nerves to excitement. Nelson’s grin quickly became known across the School of Dental Medicine as one that brightened a room—fitting for someone whose career aim was to improve people’s smiles.

This week, the Case Western Reserve University community is remembering Nelson, as the 23-year-old died Monday evening after being diagnosed in August with leukemia.

Nelson joined the Case Western Reserve community as part of the School of Dental Medicine’s pre-professional scholar program partnership with her undergraduate alma mater, Westminster College, in her home state of Pennsylvania. Case Western Reserve was an ideal fit for Nelson—a driven and intelligent student who wanted her dental school experience to focus heavily on community engagement and service, said Kristin Williams, assistant dean for admissions and student affairs at the dental school. Plus, it was within a short drive of her family, which was important for Nelson.

Williams got to know Nelson through the admissions process, but also as faculty adviser for the Case Western Reserve chapter of the Student National Dental Association, of which Nelson was an active member, even serving as its secretary in her second year. “She had a mindset of giving, of mission and of nurturing,” Williams said.

“She definitely loved helping people. She went to every volunteer pop-up clinic our school held,” said Casey Chanatry, Nelson’s roommate and a third-year dental student. “She got such a rush from extracting teeth and hearing someone be grateful because they weren’t in pain anymore.”

Nelson was “the total package—a true superstar,” said Natalie El Dabh, a second-year dental student who met Nelson during a Bible study meeting while El Dabh was a CWRU undergraduate. “As a dental student, she shined academically and clinically, learning material and skills well enough to tutor others. A great number of students in my class credit Katie as the reason we got by in Head and Neck Anatomy and several other challenging courses. She was always gracious with her time and appeared in lab before big projects to help us.”

A source of strength

Nelson brought that sense of calm and certainty to her everyday life. Mia Baker, a third-year student who met Nelson as an undergraduate at Westminster, called Nelson “one of the most fun, positive and genuine people I’ve ever known.” Their classmate Daniela Diaz said Nelson was “the kindest girl I have ever met—but also sassy. The perfect mix.”

Jaspreet Singh, a third-year who met Nelson in their first year of dental school, remembers a poem Nelson shared when she first began chemotherapy:

—Ijeoma Umebinyuo
“be gentle with yourself “

In fact, when she was diagnosed with leukemia in August 2019, her friends and family members found themselves being comforted by the patient herself—thanks, in large part, they said, because of her Christian faith.

“We used to joke that Katie handled her diagnosis far better than her friends and family, as she was constantly reassuring us that everything was going to be OK,” El Dabh said.

And for Melanie Adelstein, a third-year dental student, one of her favorite memories came when Nelson—on a two-week break from a round of chemo—surprised Adelstein with cannoli from Presti’s when Adelstein had a rough day. “She was the one who had just done four straight months of chemotherapy, and she was comforting me,” Adelstein said. “She was the absolute most selfless girl I have ever met, and my life was made so much better by her presence.”

A life of adventure

Nelson was also known for being active—from doing the P90X exercise regimen to running to playing soccer. She also loved to ski and tried her hand—and excelled—at snowboarding.

Alyzah Quereshy, a third-year dental student, remembered driving with Nelson to New York for the day to snowboard. “Katie was absolutely ruthless on the slopes: she would dart down every run we did—whether it was an easy green or a terrifying black diamond—and she actually looked really good while she did it,” Quereshy said. “I was always in awe of her ability to just jump right into it without any fear in her eyes.”

She also dove into travel—venturing to Thailand, New Zealand, Haiti, Paris, Mexico and Spain in recent years. “Katie lived in the now,” Chanatry said. “If Katie wasn’t living the dream now, she wasn’t living. She traveled at any opportunity, and she spent quality time with her friends and family doing amazing activities and creating the fondest memories.”

Memorial services still are being planned, especially given social distancing parameters. The Daily will announce additional information as it becomes available.

Students who would like support during this difficult time are encouraged to contact counseling services at 216.368.5872. This line is staffed by a counselor 24 hours a day, seven days a week. Faculty and staff also can access counseling at any time by calling IMPACT Solutions at 1.800.227.6007; you can learn more about their programs at myimpactsolution.com.